KK-Scale provides attractive variety in the showcases with the modelcars of the delivery vehicles and bus versions in scale 1:18 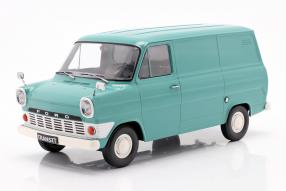 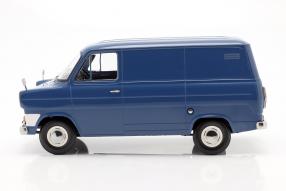 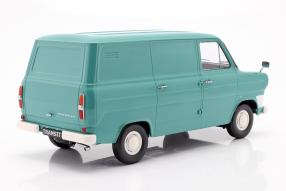 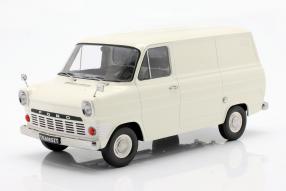 Today on Throwback Thursday, with the hashtag of the same name, the internet community remembers beautiful things from the past, the editorial team of this blog dedicates itself exeptionally not a super sports car, but still a car that reminds us on bygone childhood days; at least on those of our mothers and fathers. KK-Scale refers to the modelcars of the Ford Transit delivery van with the generation Mk. I, but actually it is the 2nd generation. Delivery vehicles with the name Transit already existed from 1961 to 1965, which in turn had been built since 1951 as Ford FK1000 and looked quite similar to a VW T2. According to Ford's usual naming scheme, the facelift was christened Taunus Transit in 1961; A completely new design followed in 1965, the models for the modelcars presented here.

KK-Scale produced markably miniatures in terms of design and appearance of the line management: There is everything right between the front and rear bumper! They exactly replicate the delivery vans, which were built in the British Langley, then Southhampton and additionally in Genk, Belgium. The four-cylinder in V-arrangement developed from their 1.2, 1.5 and 1.7 large engines from the passenger cars 12 M, 15 M and 17 M of 33 kW / 45 hp, 44 kW / 60 hp and 48 kW / 65 hp. The models from KK-Scale are likely to have a weaker engine under the front hood, because twin tires and a fender flare were mounted on the rear axle for the heavy-duty transporters under the Transit, which are not found on the miniatures. Their role models were built until 1970. The A series followed with a higher payload; from 1978 there was a major facelift and six-cylinder.

How beautiful even delivery vans can be as a model is demonstrated by the design of the details: The free-standing, chrome-plated exterior mirrors, for example, the round indicators, radiator grille and headlight surrounds match the look and feel of the sports cars from this decade. The separately attached door handles are chrome-plated, as are the bumpers; Excellently made by KK-Scale. In general, this label is moving more and more into the focus of the editors, because when it comes to choosing models, it is more diverse than some larger brands. The here presented delivery vans are made from diecast in turquoise under item number KKDC180492 and in blue under KKDC180491; both limited to 750 pieces each. This Transit comes in cream white with the item number KKDC180493, but a look at the following link also leads to the bus variants.