The team from Aachen releases two further miniatures to the Mercedes-Benz 190 E 2.5-16 Evo II in scale 1:18 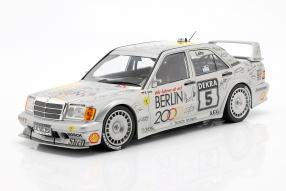 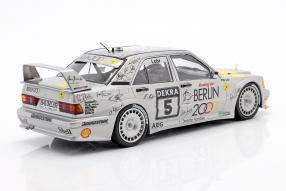 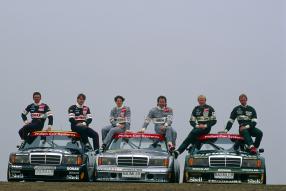 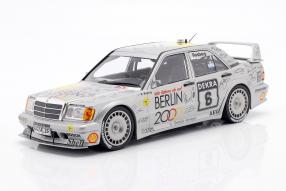 Aftr the brand new Mercedes-Benz GLA 2020, the editorial team of this blog still stays with the brand with the star: Minichamps brought two new modelcars to the Mercedes-Benz 190 E 2.5-16 Evo II to the market, which found on the shelves of specialist dealers with this week's deliveries. The two diecast miniatures on a scale of 1:18 reproduce the cars of Ellen Lohr and Keke Rosberg in the 1992 DTM. The vehicles with the “Berlin 2000” decor are particularly memorable, as they are reminiscent of the application by the popular German capital to host the Summer Olympics of the year printed in large numbers. Lohr competed at the time with starting number 5; Colleague and Formula 1 world champion Keke Rosberg with the number 6. The modelcars for the DTM 190 are very popular with fans.

And this for good reason: The Mercedes-Benz 190 E 2.5-16 Evo II had won 16 of 24 races of the German Touring car championship DTM of the year 1992 and secured the places one to three at the final settlement. No other car did collect more victories, more points, more best training times, more fastest laps and more leading kilometers in one season than the Mercedes-Benz 190 E 2.5-15 in its second evolution stage, developed by AMG, which is briefly referred to as Evo II and to which Minichamps has already presented several variants, to which the link embedded below leads you. In line with the current trend for models in format 1:18 from motorsport, Minichamps refrains from providing the models with functional parts. This is not at the expense of the appearance: They correspond exactly to their role models in terms of shape and lines.

The Mercedes-Benz 190 E 2.5-16 Evo II was equipped with a four-cylinder with a cylinder head from Cosworth, which produced 272 kW / 370 hp with its four-valve technology. Because the developers looked at the weight in view of the use in the DTM, the racing version weighed only 980 kilograms. The acceleration from zero to 100 kilometers per hour is given with 4.5 seconds. The miniatures are limited under the item numbers 155923605 (Lohr) to 204 and under 155923606 (Rosberg) to 300 scarce units and weigh 1,110 grams each. The models are top notch, a must have for every fan: The antennas on the roof, the display of the dashboard, the roll bar, the separately attached door handles, the filigree exterior mirrors and the perforated brake discs are great! Our tip: strike before they're sold out!