In detail well designed modelcars in scale 1:12 extend the product range in the most trendy scale on the current market 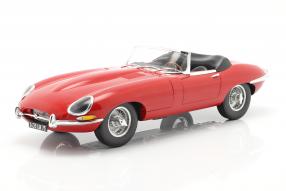 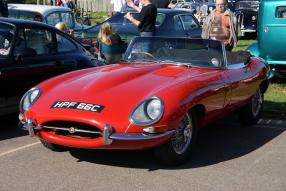 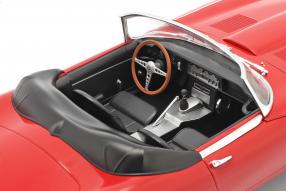 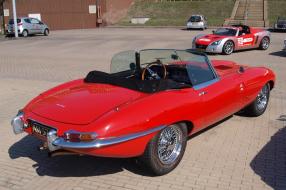 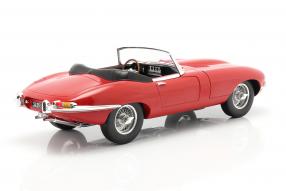 They are built from diecast, the handcrafted and optically wonderful produced modelcars of the open Jaguar E-Type from 1962, which Norev developed for the followers of the British lifestyle. The two seat sports car is part of the dream cars of its time and is especially nowadays a sought-after collector's item in good condition. The French from Vaulx-en-Vaulin thus have made a wise choice with the role model, when they decided for the replication of the roadster, presented in 1961 for the first time and developed from designer Malcolm Sayer. With the year 1962 we get to know that Norev decided for the series I: Backround information as well as a look at the modelcars, available under item number 122720, you can find here.

The headline of this article gets to the point, which makes this bright red painted Jaguar a real burner: In format 1:12 it is 36 centimeters, which measure this model in length. For comparison: If this Jaguar would be on the market in scale 1:18, it would be 24 centimeters long; in 1:43 just over 10 centimeters. With the purchase of this Jaguar, which offers correspondingly elaborated details, collectors receive more than three times the smallest model. Apart from the harmonious curves and the look that is perfectly transferred to the model, it is the interior and the design of the add-on parts. Take the rims, for example: The fine spokes of the wheels typical for this vehicle with their central locking are not just models, but small art works. Simply mega, what Norev delivers in terms of quality.

Cooling grille insert as well as indicators at the front and lights at the back can not be judged otherwise. The head lights literally nestle into the diecast environment. Under the engine hood, the role model offers a 3.8 liter big in-line six-cylinder with 198 kW / 269 hp. A maximum torque of 353 Newton meters (Nm) helped the sports car to accelerate in seven seconds to 100 kilometers per hour; with 241 kilometers per hour, the top speed was reached. The fact that the brakes wore in effect when used in succession - called fading - the customers forgave the vehicle, which especially was popular in the USA, because of its low price. Keyword price: In the German Lengede, a Jaguar E-Type Roadster model year 1973 stands for sale painted in the same color as the modelcars from Norev.

The situation on the market to the role model

The offer, declared as an emergency sale, with the exactly described above engine version puts the purchase price at 60,000 euros. Accident-free and 55,000 kilometers on the clock. One line below, another car from the same year of construction, a smooth 25,000 euros more expensive, but with automatic and 100,000 km mileage. The Jaguars, which are actually known for their susceptibility, seem to hold out. Nevertheless, if you buy something like this, you should have a sufficiently large budget for repairs and spare parts purchases. It's a little different with the modelcars: We don't expect major repairs, because the quality of Norev's cars has always had an excellent reputation!

Here: Click to the modelcars of the Jaguar E-Type in 1:12