Ottomodels brings an unforgotten cabriolets, which remind on the great years with modelcars in scale 1:18 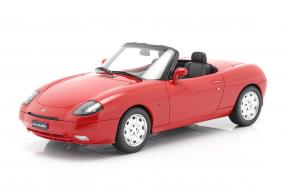 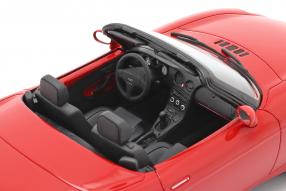 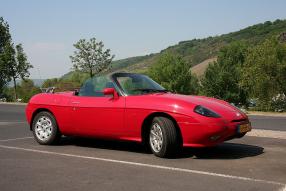 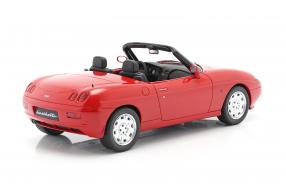 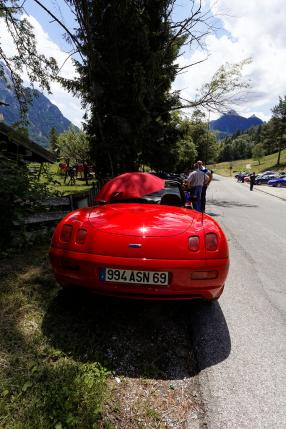 Small boat or bun, that is about the name Barchetta on which the Italian car manufacturer Fiat baptized its Typ 183, translated into English. It should be a small roadster, a European counterpart to the successfull Mazrd MX-5. And the Italians succeeded. The author of this blog can confirm this from personal experience, because unlike most other role models of the here presented modelcars, it was two wonderful years in which the Fiag Barchetta was part of the own fleet. It was one year after the presentation of the open two-seater: In 1995, the Barchetta came on the market and Ottomodels now brings in exactly that configuration new modelcars in the color corsa red, which moves the small car into the direction of a big Ferrari. They are limited to 999 units and available under the item number OT816.

Throwback Thursday; the hashtag, under which the user remembers particularly beautiful things online, leads back to 1996 today: “The yellow Barchetta was a pure source of joy! Driving was really fun, especially on winding country roads. In the city, on Königsallee in Düsseldorf or on Unter den Linden in Berlin, every trip with the Roadster designed by Andreas Zapatinas was something like a short vacation in the middle of everyday life. Enjoying the nice weather behind the steering wheel of this Fiat was pure joie de vivre!” The Barchetta was basically only one variant motorized throughout its life, although the engine was often revised: with a four-cylinder engine that had a displacement of 1.8 liters, it developed 96 kW / 131 hp; shifted by a five-speed gearbox with a short, fun, crisp gear lever.

With its 1,135 kilograms of empty weight, the drive was easy: the Barchetta accelerated to 100 kilometers per hour in 8.9 seconds; a smooth 200 was given as the top speed. "Okay, you didn't feel so safe on the highway! Highway driving in the rain was hell, the car really lived up to its name, 'small boat'! It swam more than it drove!” His 164 Newton meters (Nm) of maximum torque obviously preferred to be used in the city and on country roads. Barchetta drivers will never forget the diesel part. This is the name that popularly christened a spring in the adjusting device for the intake camshaft, which slowed down over time. This led to a very hard, diesel-like running noise when idling and at low engine speeds.

An annoying defect that could only be remedied with the last version shortly before the end of production. A total of 57,521 barchetta were built from 1995 to 2005. The number in which Ottomobile publishes its modelcars is rather modest. But the quality is very good: the lines with their curves perfectly match the appearance of the prototype. The look of the steel wheels is wonderful. The convertible top compartment, which is open on the inside, corresponds to reality, as do the faucets with a motorsport look that have been implemented without any mistake. The headlight covers - they were among the first clear-glass lamps in the large series - and the tail lights fit perfectly into the shell made of the polyurethane resin from which the models are made. Modelcars that could not be better suited to the current good weather!