Autoart brings the spectacular six-wheeler in scale 1:18 again to the trade. The modelcars are characterised by many functional parts, a mega quality and an excellent finish 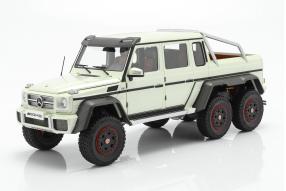 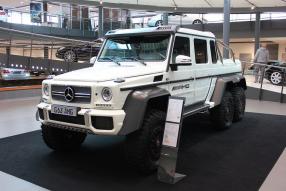 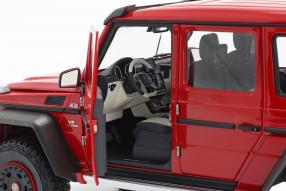 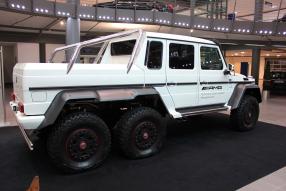 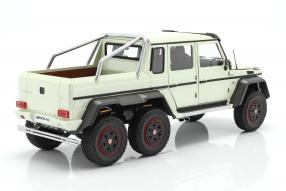 There is still a lot going on with the G-Class: The off-road vehicle, which had its debut in the year 1979 as W 460, has now been completely renewed and is still one of the image bearers of Mercedes-Benz. In 2013, the manufacturer from Stuttgart presented the Mercedes-Benz G 63 AMG 6x6, which was then, with its about 459.000,00 euors purchase price, the top end of the evolution of the model series. Autoart - own spelling AUTOart - now delivers the three-axle, which originally was intended for the Australia military, in three versions again in scale 1:18: gloss black under item number 76306, in designo diamond white (76307) as well as in designo platinum magno (grey, 76308). With it: steerable frontwheels and four openable doors of an incredible relpicated interior. A finish that only Autoart and Kyosho is able to produce.

Let's first remember the role model of this impressive, spectacular model: With its six permanently driven 37 inch wheels, portal axes, five differentials that can be locked while driving, a tire pressure control system as well as a remarkable diving depth of one meter, the off-roader is above any terrain. The G 63 AMG 6x6 almost weighs 4 tons, measures 5.87 meters in length and 2.10 meters in width. The 6x6 is powered by a V8-Biturbo engine with 5.5 liters displacement that delivers 400 kW / 544 ho and 760 Newtonmeters (Nm) of torque on the street. Clearly visible, thanks to the openable engine hood. The top speed on flat tracks is given with 160 kilometers per hour, according to the manufacturer. The Mercedes-Benz G 63 AMG 6x6 is in production since the end of 2014. Now let's focus on the models again.

So a firts view into the interior that perfeclty shows the details down to the diamond quilting of the seats. But also the appearance of the dashboard, the controls and instruments, the two-tone look generally know how to inspire. The LED-light strips at the head lights and above the windshield, the attachment parts of carbon, the reduction of the underrun protection, running boards and the details of the grill and front apron, which have been implemented particularly true to detail in size 1:18, are to be emphasized. It is also very good how Autoart hit the profile of the surrounding crash protection bar. Bulky wheels and tires are well modeled on the prototype. An impressive model, to which a red version is also available under 76304.