With strictly limited modelcars in scale 1:8, Minichamps honors the seven-time world champion of the Formula 1 and impresses the fans and collectors 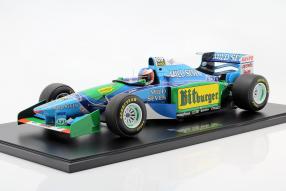 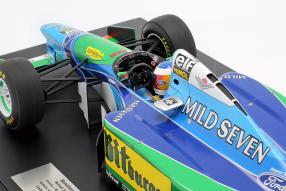 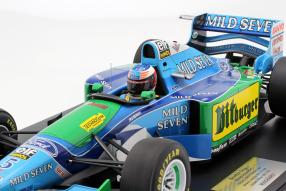 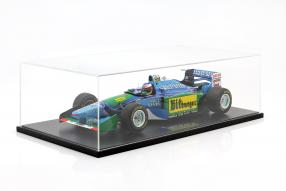 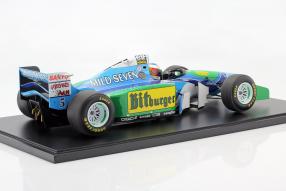 How does a modelcar-manufacturer expresses its admiration for a very special racing driver and his merits? It makes a miniature of a size that is just as impressive as the seven titles that the pilot has won! Right, it's about Michael Schumacher and in this case about the Benetton B194, which Minichamps first presented at the Toy Fair 2020 in a scale of 1:8; a model that replicates the Benetton B194 V8 used by the Mild Seven Benetton Ford team under item number 851941605 in a small edition of only 300 units. And it's not just fascinating with its details, but with the dimensions alone: it measures a whopping 56 centimeters in length! Reason for us to take a closer look at the modelcar and the 536 kW / 730 hp model with which Michael Schumacher won the Formula 1 in 1994.

One title win, which was undoubtedly overshadowed by the black weekend of April 30th to May 1st: At the final training for the Grand Prix of San Marino at the Autodromo Enzo e Dino Ferrari in Imola, the Austrian Roland Ratzenberger died; at the race on Sunday, world champion Ayrton Senna. Despite all the tragedy, Michael Schumacher however delivered an excellent performance, on which the new modelcars by Minichamps remind on. The man from Kerpen and his Benetton Ford B194 finished the season with 92 points in the drivers classification; just one point before the rival Damon Hill on Williams-Renault. In the construction rating it was the way around: Williams won infront of Benetton with 118 to 103 points. A heartbeat finale, which also remains unforgettable, because after a collision with the title rival Hill, Schumacher endet up in a tire stack.

In the 36th lap of the Grand Prix of Australia on the Adelaide Street Circuit on November 13th, 1994, Schumacher slid off the track and touched the outer wall after a left turn. But quite before Damon Hill, the Benetton made it back onto the track. Hill on the other hand tried to overtake in the next turn on the inner side, but Schumacher as the leader did not deviate from his ideal line. The collision had the consequences: Michael flew over Hill's front wheel, immediately ended up outside and saw the title fade. Hill made it to the pit, but had to abandon the race due to a broken front left suspension. Michael Schumacher was world champion for the first time! And exactly in the decoration of this race, Minichamps delivers the modelcars in 1:8, which are made of high-quality polyurethane resin and are individually numbered.

They come in a display case, which is 66.5 centimeters long and 35.5 centimeters wide and 20 centimeters high, including a base plate, and is a real eye-catcher for every office and living room. There is no question that the build quality of both the modelcars and the showcase corresponds to the high standard of Minichamps. The outer skin, parts of the undercarriage and wing are excellently crafted, as the cockpit and its internals: due to its size, it naturally offers a more precise view of things than models in the format 1:43 or 1:18. By the way, a comparison: in 1:18, a Benetton B194 measures around 29 centimeters, which is half the size of the novelty presented here in 1:8. Honestly: A model maker really cannot better appreciate the merits of a racing driver!