ck-modelcars.de goes with four new to the Retro Classics: The racing transporter and the matching racing cars in 1:18 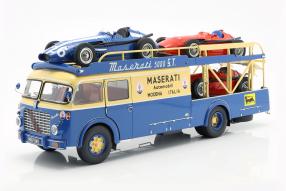 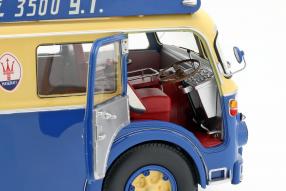 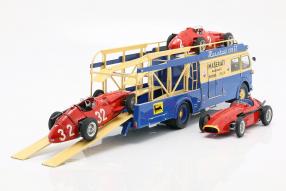 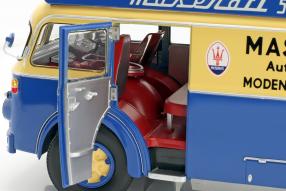 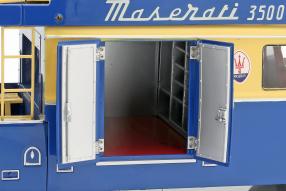 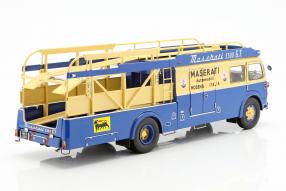 In time for the Retro Classics in Stuttgart, in terms of mood, which starts on today's February 27th, 2020, until finally March 1st, presenting youngtimers and oldtimers and for which we are also represented at the etnrance to hall 4, CMR delivered the latest racing transporter: The Fiat 642 RN2 Bartoletti in the colors of Maserati in scale 1:18. From our point of view, this diecast model is the most beautiful of its kind, because the blue yellow paintwork gives the truck, based on a Fiat bus, an elegnat, if not royal appearance. It is to add that CMR has paid a lot of attention to the details in the production of the 48 centimeters long model - if one unfolds the loading ramps, it is even 70 centimeters and delivered it with some functional parts. The ideal basis for the matching racing cars models.

The 1950s and 1960s count as the heyday of the first racing transporters. Even today, the motorhomes in Formula 1 and the other classes are the figurehead of their racing teams. With the fact that they have been rediscovered by the modelcar industry, they are celebrating an impressive comeback in the showcases of the collectors. The Bartoletti vans used by Ferrari and Maserati in the years mentioned above are the best-known vehicles of this genre - a statement based on the prototypes as well as the miniatures. The trucks of the two Italian teams were probably one of the best known and most technically mature racing vans of those days. A Fiat bus chassis with the designation Fiat 642 RN2 served as the basis. In total, there are said to have been three of these vehicles that are largely identical in construction.

The transporter had been powered by a 68 kW / 92 hp strong six-cylinder Diesel with about 6.7 liters of displacement, which was fed from extra large tanks and gave the team the possibillity to travel long distances between the racing tracks as well as the factory. Top speed was about 85 kilometers per hour. The 9,085 meter long transporters offerd place for three vehicles, but also have a workshop storage cabin and a spacious cab. The main heigth was given with 2,924 meters, the overall width with 2,492 meters. The modelcars of the Fiat 642 RN2 Bartoletti racing transporter from 1957 come under the item number CMR141 exclusively from ck-modelcars.de and modelissimo to the collector. As mentioned at the beginning, the are produced of diecast and offer a lot of functional parts. Let's take a closer look!

The modelcars impress at first glance because of the filigree replicated cooling grille at the front. Indicators and exterior mirrors, windshield wipers and headlights are perfectly implemented into the model. The interior of the cab with its red faux leather furniture and the spartan instrument holder can be seen through the two openable doors. The workshop space can be seen through a double door and offers shelves and silver painted interior walls. We are fascinated of the locking technology for the doors that CMR has even replicated. The little screws, the hinges - everything looks very well prepared! Highlight of course is the loading ramp, which is fully functional and by means of the structure offers the option to roll suitable models onto the transporter. More on that later.

Small differences to the Ferrari

As identical the models are, there are still small differences that CMR has implemented well in the modelcars: The exterior mirrors of the Maserati do not correspond to those of the model of the Ferrari counterpart with item number CMR 140; also the shape of the functional tailgate seperates the Maserati from the Ferrrai racing transporter. So, our conclusion: We are in love with shock! In the Maserati look, the Bartoletti is more than ever an eye-catcher that fits the Italian brand with current and historical modelcars. CMR also supplies four Maserati 250 F's for this; the Formula 1 car, which became world champion with Juan-Manuel Fangio in 1957 and in 1:18 came twice to Fangio and Jean Behra and Masten Gregory to the collector. An ensemble that could not have been more fitting to the Retro Classics Stuttgart!

Here: Click to the racing transporter and 250 F from CMR