DNA collectibles looks for and finds gaps in the number of role models of modelcars and reminds in the scale 1:18 of a strongly motorized sedan from Wolfsburg 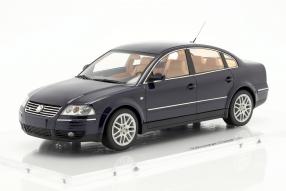 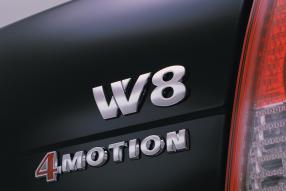 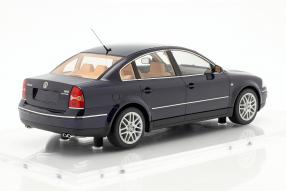 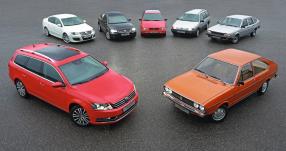 The label DNA collectibles, which has not been on the market for so long, tries to bring modelcars after their role models that have been neglected by the industry so far. Not another Porsche 911 - there are actually collectors who criticize the number of nine-eleven in fan forums and want more 924, 944 and 928 - but with the VW Passat W8 in scale 1:18 a miniature that should find its supporters, because it is published with only 320 units in small numbers. The Passat W8 closes a gap itself, because when it came on the market in 2001, it was supposed to round off the model range between the smaller Passat for the mass and the larger VW Phaeton. So it came that the model series B5 GP ventrued power-wise into dimensions never seen before and DNA presented this successful model made of high-quality polyurethane resin in noble indigo blue.

The VW Passat appeared in 1973 as a hatchback sedan derived from the Audi 80 in 1972, which initially did not receive a large tailgate, but also appeared as a station wagon called Variant. Designated with type number B1, the Passat replaced the VW 1500/1600 rear-engine cars. To date, eight generations of the mid-range series have appeared. According to press reports, the production of the Passat in Germany is scheduled to end in 2022. Our opinion: Volkswagen should not saw off the branch on which the group has been sitting quite well alongside the Golf for decades. The role model of our modelcar, the Passat W8, belongs to the series B5 GP, as mentioned at the beginning. Between 2001 and 2004, the comfortable four-door was equipped with a W8 engine and all-wheel drive, a double V engine with two VR4 cylinder banks. This vehicle marked the top model in the series.

The W8 was listed under the type number 3BS and was also launched as a variant with all-wheel drive. In the front end, which was slightly longer than the base, was the W8 engine, which developed 202 kW / 275 hp and 4.0 Newton meters (Nm) of maximum torque from 4.0 liters and received a six-speed manual transmission or a five-speed automatic. The W8 reached 100 in 6.5 seconds; with 250 kilometers per hour the top speed was reached. All-wheel drive was standard on board; unfortunately also high consumption. The engine was also installed in the VW Phaeton. But the Passat W8 was not a success: only 2,359 units left the assembly line. Despite the upgraded version of the Highline with four tailpipes, xenon lamps, chrome trim strips on the dashboard and interior door panels or seats, optionally in Connolly leather.

In the picture on the right: Seven generations of the Passat at a glance from the Passat B1 hatchback to the second version with Formula E equipment, the Passat B3 Variant, the fourth-generation sedan, a Passat W8 from the B5 series and the powerful Passat B6 R36 to the current Variant version from right to left counter-clockwise