23.09.2019Stirling Moss became 90: The modelcars to the motorsports legend

The British racing driver celebrated his 90th birthday on September 17th, 2019. His very successful life influences us, too 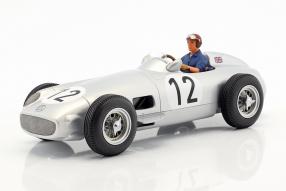 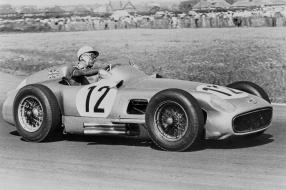 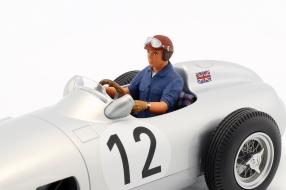 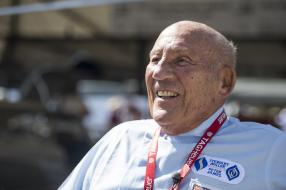 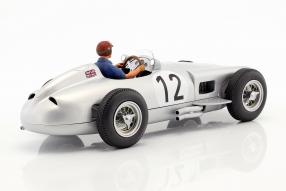 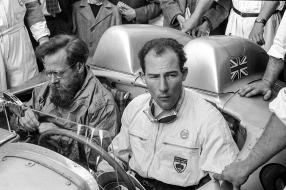 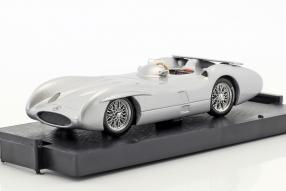 Who of you clicks on the link embedded below, reaches multiple modelcars of all brands and sizes, which are dedicated to the racing cars of the British racing driver Sir Stirling Moss. The Englishman celebrated his 90th birthday last week and his work - like that of many of his colleagues - determines everyday life in our company. Whether in the touring car Ferrari 250 GT at the RAC Tourist Trophy in 1960 and 1961, whether in the Cooper T51 of 1959, in the Aston Martin DBR1 at the 24 Hours of Le Mans the same year or of course the Formula 1 cars from Mercedes-Benz, the Silver Arrows - Moss wrote motorsport history through continuous success, with which we come in contact daily through the corresponding miniatures. What we take as an opportunity to highlight its past and life's work in connection with the miniatures.

Moss is the star of the Mercedes-Benz racing department in 1955. He celebrates outstanding victories with the Mercedes-Benz 300 SLR racing car W 196 S and becomes Vice World Champion of the Formula 1 with the W 196 R. His successes are highlights in the 125 years of motorsport at Mercedes-Benz. In 2000, Moss was raised to the peerage. "Sir Stirling Moss wrote motorsport history at Mercedes-Benz in 1955 with triumphs such as his overall victory in the Mille Miglia and winning the Grand Prix of England. Ever since, he has been closely associated with our brand. We sincerely congratulate this outstanding racing driver on his 90th birthday", says Christian Boucke, Head of Mercedes-Benz Classic. For example, on May 1st, 1955, the then 25-year-old driver wins the Mille Miglia on the Mercedes-Benz 300 SLR racing sports car.

This in the best time, which is ever achieved there. The race started on April 30th, from Brescia to Rome and back on a 1,000-mile and extremely demanding route, with co-driver Denis Jenkinson and an average speed of 157.65 kilometers per hour. Another great moment is Moss? Victory with the Formula 1 racing car Mercedes-Benz W 196 R at the Grand Prix of Great Britain in Aintree on July 16th, 1955 in front of his teammate Juan Manuel Fangio. It is the first victory of a British racing driver in this Grand Prix ever, to which the modelcars from iScale set a very special monument. The miniatures of diecast with the item number 1180 0000 0009 and the starting number 12 offer the collector a faithfully cockpit reproduction and are exclusively available at ck-modelcars.de.

iScale dedicates the silver arrows and a few more miniatures, which you can get to know, if you follow the link embedded below. But now back to our birthday boy. The base for the career of the British is already laid at primary school age: Inspired by the motorsport episodes of his mother Aileen and his father Alfred, the boy dreams of becoming a professional racer. At the age of 15, he receives a driver's license thanks to a special permit. In 1948, Stirling Moss buys a Cooper 500 racing car. With it, he started at the Formula 3 with 15 races, of which he wins twelve. This is the beginning of an international career. In 1949, the young racing driver became a member of the British H.W.M. factory team in the Formula 2 and in 1949 and 1950 he won the English Formula 2 championship title.

In 1950, Moss also wins the Tourist Trophy with a private Jaguar XK 120, beating the manufacturer's factory racecars as well. The following year he leads the Jaguar team. Moss has not only clear goals in terms of his athletic achievements, but he also resolutely tackles the professionalization of his career. For example, he is one of the first professional drivers of this era to hire a manager who looks after engagements and fees. How important the decision is, is shown in 1953, when manager Ken Gregory approached Mercedes-Benz race director Alfred Neubauer: whether the Stuttgart-based brand wants to engage Moss in the re-entry of Mercedes-Benz into Grand Prix racing? Neubauer convinced himself in 1954 of the great talent of the British racing driver. He invites him to test drives and commits him for the season 1955 as a works driver.

Moss should complete a total of 17 races with the successful Formula 1 racing car W 196 R and the new 300 SLR racing sports car (W 196 S). Moss had his Formula 1 debut in the silver arrow on January 16th, 1955 at the Grand Prix of Argentina, where he won together with Hans Herrmann and Karl Kling in the heat of Buenos Aires the 4th place. The highlight of the season is his victory at the Grand Prix of Great Britain. In two other Formula 1 races in 1955, the Belgian Grand Prix and the Grand Prix of the Netherlands, Moss arrived behind Fangio in second place. He finishes the season as Vice World Champion of the drivers' standings. In 1955, Stirling Moss was most successful in sports car racing with the Mercedes-Benz 300 SLR racing sports car, which was specially developed for this season. His career end in 1962 and is followed by his time as a brand ambassador.

Here: Click to the modelcars to the topic Stirling Moss