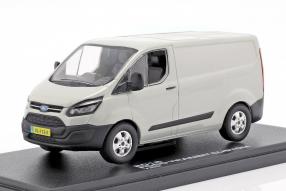 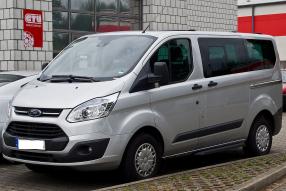 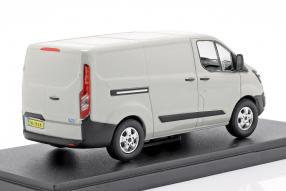 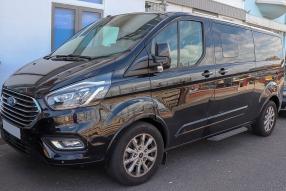 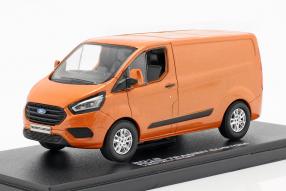 After motorsport was the main topic in our blog the last days, we turn to a completely other topic today: We are making useful and present you modelcars of the Ford Transit Custom in scale 1:43. Greenlight has presented the models of the seventh generation popular delivery van as part of the Triple9-Collection in two versions: One the one hand in the original version, which is on the market since 2012 and on the other hand in the optic of the great facelift from 2018. Both versions are respectively available in each three miniatures: The Ford Transit Custom V362 from 2016 comes in white under item number 51094, in black under 51095 as well as in noble silver metallic under 51096. The model year 2018 is reduced under 51274 in grey metallic, under 51275 in white and under nummer 51276 in orange metallic.

The Ford Transit Custom is the successor of the short version of its predecessor and won the title Van of the Year in 2013! The car manufacturer had in the concept of this vehicle less the utility value than the increase in market share in mind, which is why Ford put on the then new Transit a more pleasing exterior. As it's common in this segment, there are different versions of the van with wheelbases and heights, but the vehicles have the range of engines in common: The drive took over at the beginning of a 2.2-liter diesel engine with common rail injection, either 74 kW / 100 PS, 92 kW / 125 hp or 114 kW / 155 hp and a maximum torque of 310, 350 or 385 Newton meters (Nm) delivered. Shifted by six-speed manual, top speeds of 147, 157 and 164 are achieved.

Since 2016, however, the program has changed: The diesel four-cylinder now works with 2.0 liters of displacement: 77 kW / 105 hp, 96 kW / 130 hp and 125 kW / 170 hp, 360, 385 and 405 Nm continue to the six-speed manual gearbox or the optional automatic. At 150, 160 and 175 kilometers per hour, the new vehicles are slightly faster than the original version. For all its love of appearance Ford has not forgotten the purpose of the cars: Even the smallest version holds three Euro pallets! Of course our miniatures do not have to pack this. The modelcars made of diecast inspire with an extremely good finish: this is not a toy, but the highest model construction level à la Norev and Minichamps. With the model year 2018, the Transit Custom received a new front and a new instrument panel for the new engine, which exactly replicates the models.

The modelcars in the check

The new grill looks more powerful, but also more pleasing; the front looks calmer and sportier. At the line management of the sides and at the rear no big changes can be found. The engravings of the doors fall out moderately; the exterior mirrors housings correspond in form and look to its role models, what absolutely applies for the modelcars. The fact that they also have different replicas of the rims, brings some variety in the showcase. Anyway, our conclusion is positive: If you have a collection of Ford cars in your local showcase, then the Transit Custom from Triple9 is a really sensible and nice addition that you do not need to invest too much investment, because the prices are on one acceptable friendly level.

Here: Click to the modelcars of the Ford Transit Custom