The top version of the model series W463 out of diecast and in scale 1:18 is a real must have for friends and fans of the brand with the star 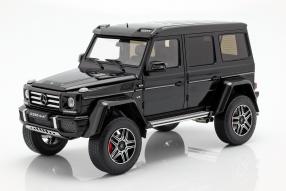 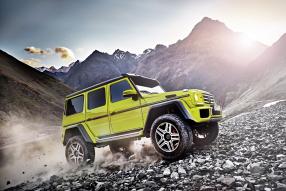 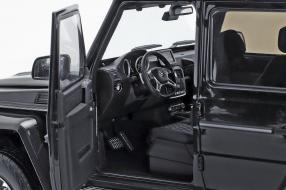 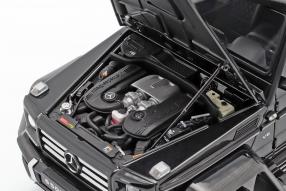 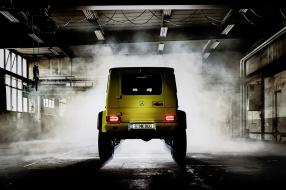 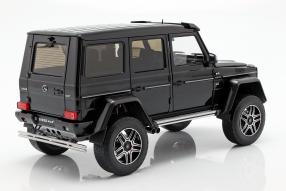 It is already a few days ago, where we got really fantastic modelcars, which made our eyes shine far and wide: The miniatures of the Mercedes-Benz G-Class 4x4² in scale 1:18 from Almost Real. The miniatures, built out of diecast, know with its details how to really convince that it can safely be considered the best G-Class of all time within the collector's cabinets. A predicate that can however also apply to the model: After the sensational Mercedes-Benz G 63 AMG 6x6² with its six wheels, the makers followed suit and presented at the Geneva Motor Show & Accessories in March 2015 with the new Mercedes-Benz G 500 4x4² a further development, which Almost Real has now delivered in obsidian black and under the item number 820202 in scale 1:18 and which has many functional parts.

But let us first remember the example: The basic recipe for the all-conqueror is simple, because the engineers have reduced the all-wheel drive train of the 6x6² including its gantry axles by one axle and the whole thing with a newly developed variable suspension, 22-inch wheels combined with 325 / 55 tires and the standard body of the G-Class. The basic models provide the foundation in the form of body and ladder frames, which easily compensate for the significantly increased performance of the G 500 4x4² of 310 kW / 410 hp without any reinforcements. The car is powered by a completely new V8 engine with 4.0 liter displacement, twin turbo and piezo gasoline direct injection, which Almost Real has donated a successful replica. The two turbochargers of the engine are located in the cylinder V of the drive set.

As also new at the time was the chassis with double spring shock absorber legs and adjustable damping; but it was also new that the car should look good not only in the terrain but also on the road. Mercedes-Benz commented: "Due to the significantly wider track of the portal axles compared to the production vehicle (plus 299 millimeters), the large 22-inch wheels with tires of the dimension 325/55 R 22 and the adjustable damping with Sport mode, the upscale one G-class despite the higher center of gravity so dynamic through the corners that the occupants rather think beein in a sports car rather than in a SUV." Something that we can understand in the above embedded video that - if you do not know it - alone already worth seeing because of the knocker of JP Kraemer, but now back to the models.

At cheaper modelcars the collector seeks the depth of detail, with which Almost Real scores. This is especially noticeable in the already mentioned replica of the engine, which was not only executed by a cover, but very filigree simulates the hoses and lines as well as liquid container and surface structure. The hood mount meets the high standard of Autoart. The way in which the front turn signals and rear light units, brake system and footboard were reconstructed, the Almost Real 4x4² stands out clearly from other modelcars. It is a feast for the eyes, the modelcar, which also has four openable doors and also allows access to the trunk. The finish of pedals and instruments completes the good impression. Do you understand why our eyes radiate?

Here: Click to the Mercedes-Benz G500 4x4² from Almost Real