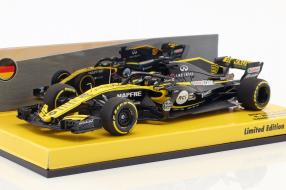 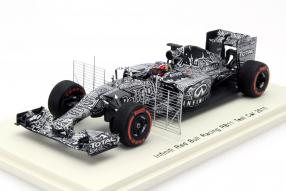 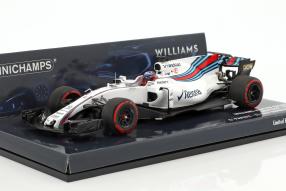 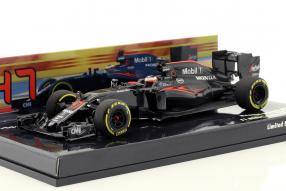 On the weekend we saw the Gran Prix of Bahrain, the overall 999th run of the Formula 1-world championship or Automobil-World championship, when it was born in 1950. The Gran Prix on the Bahrain International Circuit is discharged since 2004; the version of 2016 offered the stage for the young Belgian Stoffel Vandoorne for his involvement in the Formula 1, on which the modelcar of the McLaren MP4-31, signed by him, reminds from the home of Minichamps. The miniature with the item number 533164347 in scale 1:43 and produced out of diecast, signed by Stoffel and limited to 500 units worldwide is exclusively available at CK. And this brings us to the topic, which this article is about: we summarize, which modelcars we still have in the range, which lead a Bahrain Grand Prix in the name.

This year is the 70th season of the official FIA Formula 1 World Championship, which was held as the Automobile World Championship until 1980. In 2018, Sergio Pérez and Esteban Ocon started for the Sahara Force India Team, to which CK also offers only two modelcars. These are the scale 1:43 Force India VJM11, made out of high-quality resin, which recreate Pérez 150 times and Ocon's 333 copies. They are available under item numbers 447180011 (Pérez) and 447180031 (Ocon) and are almost sold out. Nico Hulkenberg made it in 2018, at the Grand Prix of Bahrain with his Renault R.S. 18 of the Renault Sport F1 Team to finish in sixth place; a placement around which he somehow ends every race to date.

We say congratulations in China

The modelcars in format 1:43 were made by Minichamps out of resin and are also available in a number of 150 models also exclusively at CK under the item number 447180027 appeared. Pascal Wehrlein entered the Sauber C36 in 2017 at the Grand Prix of Bahrain for the Sauber F1 Team; In this very decoration Minichamps has brought the modelcars with the item number 417170094 on the market. But for fans of Lewis Hamilton and Max Verstappen, for the Gary Paffett and Daniil Kvyat, it is worthwhile to click to overview of the still available modelcars for the Bahrain GP. We look forward to the 1,000th Grand Prix taking place on April 14th in China: Congratulations, Formula 1!

Here: Click to the modelcars of the Bahrain GP