With the high quality model car made of resine plastic Minichamps creates a similar great work of art, as the model has been one. 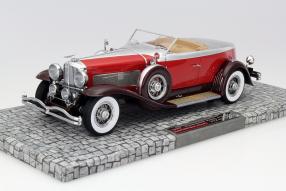 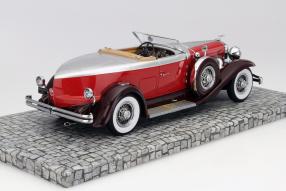 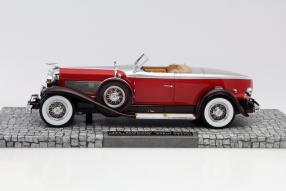 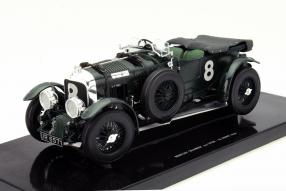 So, dear  model car friends, after an exciting Formula 1 weekend full of adrenaline on the Monza circuit and in front of  the domestic television, it is time to settle down a bit. Nothing is more appropriate than to cruise with a tasteful classic car, so the Duesenberg Model J such as Torpedo Convertible Coupé, that Minichamps put on our editorial desk last week.


The  edition limited to  999 copies is  a real eye catcher, modeled slavishly accurate with lots of details and therefore to be regarded as a small artwork worth its purchase price of 299,95 Euros. The video of our dear colleague shows all the details of the model produced resine plastic that mimics a luxury car that was built only for the very rich and famous at that time.

Review: Duesenberg how it all began

Frederick and August Duesenberg changed their names in Fred and Augie Duesenberg from the time in which they had taken foot in the United States  together with her mother. The brothers, their 4 siblings and mum left their  home town Matorf-Kirchheide in Lemgo after the death of their father and husband in 1881. After initial attempts in bicycle and the construction of a first motorized bicycle, the brothers devoted themselves to the tuning of cars of other manufacturers starting 1902.


Fred had previously made himself known as a driver. The Duesenberg Motor Company - short DMC -  founded in 1913 in St. Paul, Minnesota. First, a four-cylinder, then an engine with 8 cylinders was developed. At the time, traditional carmakers only built the chassis and the drive; the body was the specialty of coachbuilders. That is why there is no 2 exact same Duesenberg; 470-650 pieces were supossedly built. The sources contradict each other in terms of quantity.


The merge of Duesenberg, Auburn, Cord


The cars made their way: in 1921  a Duesenberg even won the French Grand Prix at Le Mans. 1926  Errett Lobban Cord,acquired the company, led it along with his trademark corduroy and the previously acquired brand Auburn. The Duesenberg brand took the top spot in the group in terms of performance, sportiness and also a price ; comparable today with Bugatti, Rolls Royce and Bentley.


The Duesenberg earned a good reputation with reliability as well as advanced technology, such as the hydraulic brakes, DOHC four-valve technology and compressor supercharging. Kings, movie stars and gangsters bosses drove Duesenberg. The Model J  presented in 1929-the model for our model - had a displacement of 6.9 liters, an output of 195 kW / 265 hp and a top speed of 180 kilometers per hour.


A Duesi is nothing for downshifting


His successor, the Duesenberg SJ, received a supercharged engine and brought on 235 kW / 320 hp and a top speed of 243 kilometers per hour in 1932. These are, after all, speeds, which are today reserved to cars like Audi S6; which feature lots of electronics, a lowered suspension, ABS and a rigid body.

Who can imagine to drive about 235 kilometers top in  a long-legged Duesenberg, probably  also understands the hard work that has been driving earlier racing cars, cars like the Bentley 4½ Litre Supercharged Blower Le Mans from the same period in 1930: in the article that can be accessed via this link, we reported on the comparable car.

Our view from the beginning of this article we  therefore take back but: The quality of the model speeds up our heartbeat more rapidly than expected.