In scale 1:18 and matching the new race transporter, iScale has presented two first cream miniatures to a legendary star of the 1950s 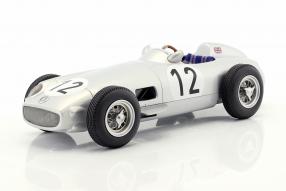 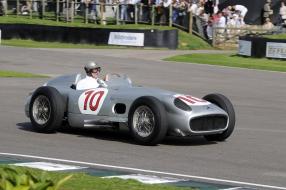 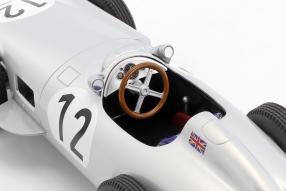 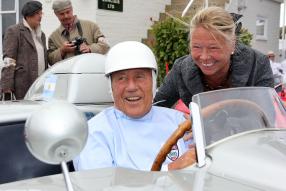 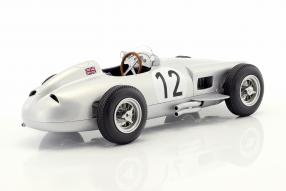 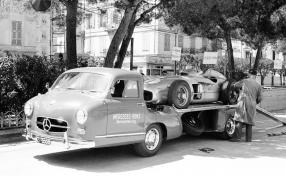 The Porsche 911 appears in its 8th generation and the Motor Show Essen opens on the weekend: The history of the automobile and motorsport is thus in these days again increased interest. So it fits in quite well that the partners iScale and ck-modelcars have adopted the Mercedes-Benz W 196 and present powerful model cars in scale 1:18; Inspired by the fact that the Silver Arrow dating from 1955 fits well with the race transporter "The Blue Wonder", to which iScale and ck-modelcars presented a new edition in the same size. The W 196 appears in several versions, so can justify a beautiful collection. Let's start with the start number 8 and Juan-Manuel Fangio and the No. 12 from Stirling Moss.

The No. 12 won the British GP in 1955 and also represents a model car as a special feature: Like the aforementioned race transporter, the small Moss is available exclusively at ck-model cars. A great thing, because the miniatures are made of high-quality diecast and correspond exactly to their famous role model in the detailing and appearance. The United Kingdom Grand Prix of 1955 took place on 16 July 1955 at the Aintree Circuit in Liverpool and was the sixth race of the World Cup then. Mercedes-Benz came as a double winner of the two previous runs at the 4.828-kilometer Aintree Circuit at Liverpool and also dominated the training: Stirling Moss was the first Briton and achievd his first personal pole.

Sounds familiar to us: Silver dominance! The race ended with a tight finish for the time: only two tenths separated the winner Moss from Fangio, so that the question was discussed whether Fangio let him win in the Mercedes-Benz-dominated race only because the second place is enough for him to win the title. Don't we also know these discussions from years ago, which are not that long ago? In any case, Moss was pleased because it was the first of 16 Grand Prix he was to win in his career; but the only one on a silver arrow. And: he didnt became world champion anyway. Only 57 years later, the English Grand Prix again was won by Mercedes-Benz: Lewis Hamilton 2013.

It was the beginning of the modern Formula 1, in which this was still called automotive World Cup. After the war, Mercedes-Benz did not return to the premier class of motorsport until the middle of 1954 and brought the W 196 a car, which was launched as a monoposto with freestanding wheels and as a streamlined car. The cars were powered by an eight-cylinder with 2.5 liters of displacement, which forwarded the 189 kW / 257 hp via a so-called center output to the five-speed gearbox and the rear axle; The engine was divided into two four-cylinder blocks. Advantage: a torsion-susceptible long crankshaft was avoided. A technical feature of the W 196 was the then completely new gasoline direct injection. The monoposto was 650 kilograms 50 kilos lighter than the streamline car.

At top speed, the W 196 were at about 280 km / h. A constructors' championship did not exist then: Fangio secured the lead in the drivers' championship with 40 points and gave Mercedes-Benz a title in the first year after the comeback. The model cars of the racing car from Stirling Moss have been published under the item number 1180 0000 0009. This is followed by the car in plain body version without a silver number, Fangio with the 8 as winner of the GP Netherlands, Fangio with the No. 10 as winner of the Belgian GP, ??in which Moss finished second (# 10). But also for the British GP 1955 a model for the second-placed is comming. The cars of Karl Kling and Piero Taruffi, the third and fourth placed in the same race, will follow until the end of January. A really nice collection theme at very fair prices!