The model car painted in arablue also directs the Spark farewell to the first generation of the R8 . Their headlight technology again sat a milestone. 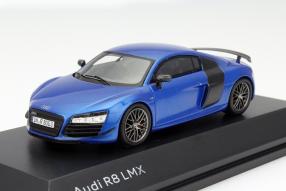 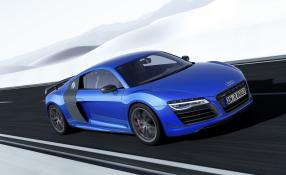 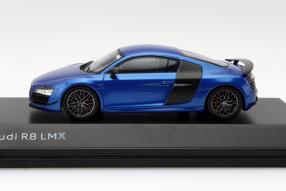 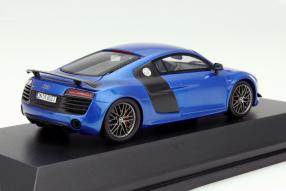 The small series label Spark offers with the model of Audi R8 with the LMX  an especially nice treat to the fans of model cars  . Available as an advertising model in Audi's packaging the model car is kept in a scale of 1:43 and presents the Edition model of the super sports car  that was limited to 99 copies. With this vehicle, Audi brought the high-resolution matrix laser technology of headlights into series.

On the occasion of the premiere of the R8 LMX Audi promised that this will even more flexible and highly variable road illumination - in every situation. To get directly to the model: the fans should  notice that the headlights of the model car differ considerably from those of the standard editions of Schuco and thus pay full justice to the  LMX .

What exactly does this technology do?

The LED headlights are each equipped with a laser spot, which is active with switched on   high beams  when the driver reaches  a speed of 60 kilometers per hour. The light cone of the new LED-laser light combination has twice the headlight range of a normal full-LED headlamp. The diameter of the blue laser with 450 nanometer wavelength is 0.3 millimeters. The blue laser light is converted with the aid of a phosphor in white light with a color temperature of 5,500 Kelvin.


So Audi shows high efforts to breathe new life into the subject of roadway lighting and reaffirms  obviously the claim, which the carmaker states with the advertising message "projection by technology" . Optically  the LMX acts more sharply contoured than the weaker brothers.

Apart from the changes due to   the new lamps  Spark has considered the front of the model very closely and also implemented the other special features : The Capital Grille has a different mask that is partially closed. In addition to the filigree simulated lamellae of the lateral grid, splitters are fixed to the body. The perforated brake discs wear red brake calipers; the attachments of the aerodynamics and the side blades are constructed in carbon look. Hoods and doors  remain - as always with models resine plastic - closed.


The exterior mirror housings and their design have taken the exact form of Spark. Indoor ventilation and rear window heating are miniaturized exemplary. Likewise, the interior of a 5.2-liter V10 FSI engine with 419 kW / 570 hp powered Audi, which was conducted in the summer of last year in Germany with 210,000 euros in the price lists. The Spark model is available under the item number 5011418413 and for only 59,95 Euro. From 2006 to the end of 2014 a total of 26,037 Audi R8 of the first generation were produced. 24 percent of them - ie 6,176 pieces - were Spyder