Cheaper than ever ck-model cars can offer the current The Beetle. Interested in purchasing - a chance for you to build a new collection or to expand. 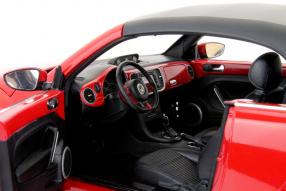 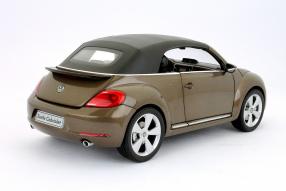 When a buissnes economies well, not only the company benefits but so does the customer. ck-modelcars purchased a big amount of Kyosho and Schuco models of the recent VW Beetle to sell them to fans and customers for a fair price. The Beetle 1:18 models in the colors tornado red, oryx white and brown metalic are now available for only 39,95 Euro  instead of 94,95 Euro. And in amazingly good quality. Kyosho has delivered many hits in the recent years: BMW Z8, Audi R8 or Audi Q7 -the finish held in 1:18 scale miniatures was on an almost unsurpassable level: Lowest possible gap dimensions, paintwork in top-class quality, haptic valuable plastics. The mold makers from the Far East have taken into account at this level, all the requirements of the Volkswagen design department, implemented the curves of the body perfectly into the model.

The proportions and the design of The Beetle 1:18

The appearance  of the bigger one among the small The Beetle is exactly that of the prototype; the look of the design of the two-door model  in the scale of 1:18 could not have been transfered better by  the engineers. Pay special attention to  the headlights, the inner life and reflectors as well as daytime running strips  for they were so detailed implemented into the model that the viewer could get the impression that they actually work. They don't, but they nestle perfectly into the environment from die-cast zinc. That doors and hoods can be opened and thereby provide insight into challenging modeling technology, that goes without saying for Kyosho. Volkswagen has created the new, sporty Beetle,   a car that should appeal to the male clientele for Wolfsburg. But the designers gave the car harsher forms, modeled the lines sharper. The hump of the body from the model,  as well as the prototype, has some resemblance to Porsche 911.  Somehow, the car looks like a sports coupe. A property that is to make the car for male audience more interesting.

A look at selected details of the Kyosho model

The not breached executed grill in the front apron fits well without joints in the body, just like the headlights. But the mold makers have fitted the indicated sills at the sides and the glazing of the cabin just perfectly. Part of  the fascinating details is the transition from the windshield to the glass in the sunroof;  inspiring are  the details in the interior: all forms, the  control panel, the  dashboardmodel- perfectly colored. Not any different from the Beetle models in 1:43 made by Schuco. It comes in four different colors and is now reduced to 19,95 Euros each instead of 32,95 Euros. The limited edidtion in tornado red is as of right now available for a sensationel price of 9,95 Euros only instead of 37,95 Euros. While the Schuco models roll with the roof open in the display cases, the model of Kyosho has an attachable component that reproduces the folding top in the closed position. Anyone who wants to expand their collection to a complete overview on VW The Beetle, now enters at the right time.