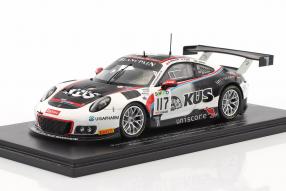 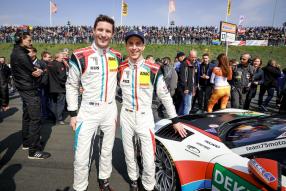 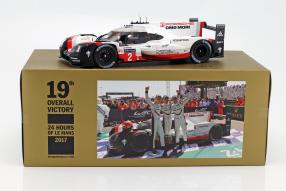 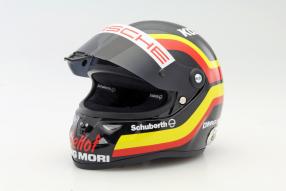 It was the news from last week: Ck-modelcars and the Team75 Bernhard of long-distance champion Timo Bernhard started a cooperation for the ADAC GT Masters. For the first time, our logo will appear on a racing car and will therefore also be featured on corresponding models. Of course, this will take some time, but let's use the time to see which model cars in our portfolio are linked to the name Timo Bernhard; Perhaps also to be understood as a suggestion for those collectors who want to dedicate themselves to a manageable subject alongside Michael Schumacher, Nico Hulkenberg, Nico Rosberg or Sebastian Vettel. Let's start with the Porsche 911 GT3 R of the 991 series, which we will carry as a promotional edition in an edition of 500 copies and whose outer packaging proudly bears the logo of Team75 Bernhard.

The model replicates the car, which took fourth place in the 24 Hours of Spa-Francorchamps 2017 under the name of KÜS Team75 Bernhard with drivers Kevin Estre, Michael Christensen and Laurens Vanthoor. In addition to the logo on the box a very nice photo and the most important data for the Nine-eleven can be seen. It is available under the item number T75B17 and comes from the production of Motorsport-Professionals Spark. From there come many other miniatures that emulate the cars of Timo Bernhard: The Porsche 919 plays the biggest role, because with it the race car driver (born February 24, 1981 in Homburg) won, in 2015 and 2017, the FIA World Endurance Championship WEC. The models of the Porsche hybrid are mainly in the decoration of the races held for the 24 Hours of Le Mans and also packaged very nicely.

Thrilling driving shots - even against aesthetic sunset - upgrade the model cars immensely; no matter if it's sparkling clean or in the dirty version. Still the miniatures are to the cars of the class LMP1 in the scales 1:64, 1:43 and 1:18 to have, but so slowly the stocks become smaller. And there will be hardly any new models, because Porsche and Timo Bernhard will not compete in the LMP1, which has allowed the racer to take the wheel of his own team this year. Bernhard also piloted a nine-eleven in 2003. For The Racers Group he won the 24 Hours of Daytona with his driver colleagues Kevin Buckler, Michael Schrom and Jörg Bergmeister on a 911 GT3 RS 996!

The blue model car also comes from Spark (43DA03) and is available in 1:43 scale. In this size appears a model of the Porsche 911 RSR in which Bernhard competed alongside Jörg Bergmeister and Patrick Pilet at the 24 Hours of Le Mans 2013 and took the 16th place overall in the car of Team Porsche AG Team Manthey. His attachment to his role model Stefan Bellof expressed Timo Bernhard by driving at the 2015 WEC race in Spa with a helmet design inspired by the Giessener. Which is also available as a model in the format 1:2. You can recognize, dear collectors, that it pays to pay attention to the topic Timo Bernhard, because there are really very beautiful, high-quality miniatures to the cars of his career; this year also one with our logo - which makes us happy and proud.