Two models and a legend, this should be a fine thing for the cinema fans among you: The main actor from the legendary film in 1:64 and 1:43 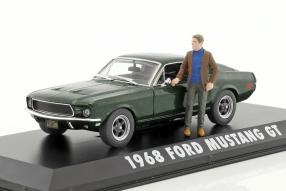 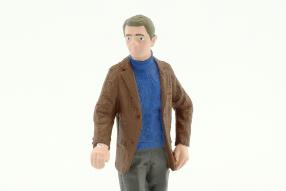 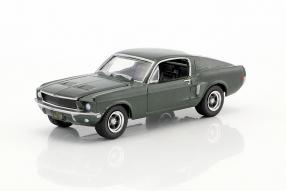 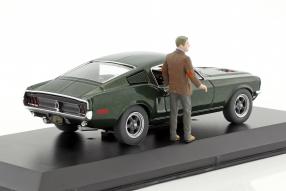 Did you all have a good weekend? Outside enjoying the warm temperatures, or rather at home with the loved ones or spending time with Netflix & Co? Those of you who are known as the film fans, know that we always offer great models to legendary cinema cars. Two model car sets from Greenlight are on the market for fans of the movie "Bullitt" with acting legend Steve McQueen. On the one hand a 1:18 scale miniature of the main character himself and in the size 1:64 the corresponding model car, available under the item number 29931. Okay, now it seems a bit weird to deliver a much larger figure to the model car, but whoever owns the Mustang in 1:18, gets a great picture of the actor. And a little racer for the son.

Something that makes more sense is the issue of the Ford Mustang 1968 from the movie "Bullitt" in size 1:43, that Greenlight also offers under 86433, but the assigned figure is the same size. We like the larger version quite well, because it exactly meets the lines and the appearance of the legendary movie car. The design of the details around the grille and the structure of the surfaces in the seats fits perfectly. The replicas of the mirrors, the alloy wheels and the small, playful-looking taillights are anything but toyish. We compliment Greenlight here for the reasonable price of the sets. The small 1:64 is also a very good model. Given the growing popularity that customers are receiving from this benchmark is this a real tip.

Prominent moderator commits to the Mustang

But the Ford Mustang "Bullitt" is still in the back of the mind of the author of this article. Not because of the special edition of the current Mustang presented by Ford last year, but because of "auto mobile" host Andreas Jancke in 2014 posted a selfie on his official Facebook page with a clear commitment to his sympathy for a Ford Mustang Fastback green, the Mustang by Steve McQueen from the movie "Bullitt". The prototype for the model cars presented here became particularly famous in comparison to the model series of other model years because it had to withstand one of the longest chases in film history in the movie "Bullitt". We had reported about it in the blog back then.

This Ford Mustang GT 2 + 2 Fastback is the 2nd version of this series. The Ford Mustang I was built from 1964 to 1973 in four versions, all of whose bodies were given an outward appearance. In two years 789,000 copies were created of the Mustang of the 2nd version, including 113,000 Fastback models and 70,000 convertibles. The engine range of the 1968er ranged from 143 kW / 195 hp to 246 kW / 335 hp. But even the 287 kW / 390 hp high-performance seven-liter engine was not strong enough when it came to making the Ford Mustang Fastback look good in 1968 in the pursuit of the Dodge Charger R / T in the movie "Bullitt". He had to transplant additional steam under the hood. By the way: At the time, three weeks of shooting were necessary to get to ten minutes of film sequence. Legendary to this day.

Here: Click for the model cars of the Ford Mustang "Bullitt"