On the 45th AvD Old-timer Grand Prix, the Grand Turismo from 1977 was the star of a special exhibition. We searched our archive. 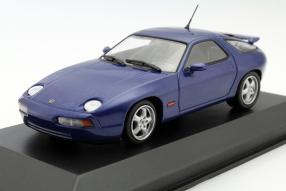 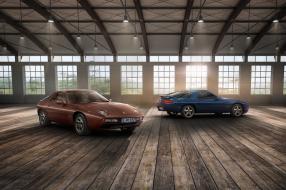 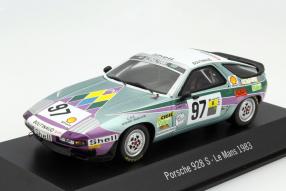 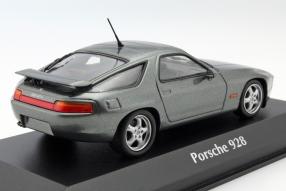 No less than the Porsche 911, the two door car, that was first introduced to the public in 1977, Impressive in the design, voluminous in the appearance and strong in the stature was however quickly clear that the Porsche 928 was and is more travel coupe than sports car. The car, designed by Harm Lagaay, Wolfgang Möbius and Peter Reisinger, radically differed from the rear-engine concept of the nine-seater, had a V8 in the bow, and the gearbox was flanged to the rear wheel drive to make the weight distribution as optimal as possible. The original model brought 176 kW / 240 hp from 4.5 liters displacement. The completely newly developed engine and gearbox were connected by a jacket tube, in which the shaft ran, which transmitted the power of the propulsion unit backwards. This construction had vibration-related advantages and allowed a precise guidance of the shifting rod.

But all that beautiful technique made out of the big - with 1.89 meters nearly 20 centimeters wider than a nine-nautical coupe just no sports car; not even, after the Porsche over the course of the production period until 1995 performance after. In 1992, the 928 GTS was introduced to the market, which generated 257 kW / 350 hp from around 5.4 liters. The final model version of the original model also differed visually, and now it was more rounded and thoroughly mature and pleasing. As Porsche declared on the occasion of the Oldtimer Grand Prix, however, the interest of the fans of the technically elaborate, luxurious and still fascinating sports car is now awakening on the now up to 40 years old Porsches. A completely overhauled GTS from the year 1992 and with 233,000 kilometers is currently available for 34.850,00 Euro.

The model cars for the Porsche 928

The prices of the first editions start at 14,900.00 Euros, but caution is necessary because of the enormous costs for maintenance. The question of durability does not arise: the use of aluminum on doors and hoods and hot-dip galvanized steel sheet was a battle of corrosion. Only the maintenance of the technique is costly. From our point of view, the interest in modellautos, which have appeared in the Porsche 928, should also rise. That is why we looked around the camp to see what role the Gran Turismo still plays in us. And, admittedly, a very recent one, because Minichamps has revived the 928 in the Maxichamps series, even as a 1992-GTS; In two colors and the size 1:43. The Kleinserienlabel Spark has built two Porsche 928 models from racing.

On the one hand the 928 S with which the drivers Raymond Boutinaud, Patrick Gonin and Alain Le Page participated in the 24 Hours of Le Mans 1983; And the Renntaxi from the Nürburgring in the Trigema look from the same year. The generation 1980 corresponds to an automobile model of the Porsche 928 S in the civilian version: Three Spark models, which may well be called real rarities. Impressive also the miniatures for the conversions, the Porsche 928 BB Targa in 1:43 or the Porsche 928 Artz Kombi 1979, however, in 1:18 scale. A successful model of this size was presented by Autoart - AutoArt AutoArt - after the model of 1977, as it was built up to 1995. We will keep this collection in mind, but the 928 and Porsche first of all congratulations!

Here: Click for the overview of all 928 in the shop