With the super sports car in the 1:18 scale, the Italian model car label ties in with the great tradition of the F40, with which this format became socially acceptable. 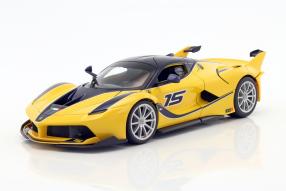 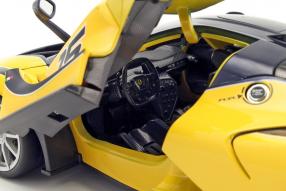 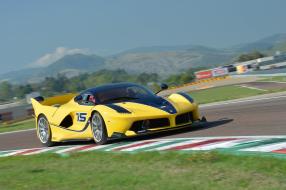 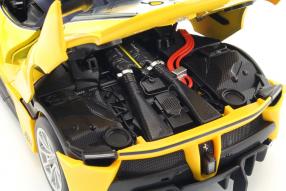 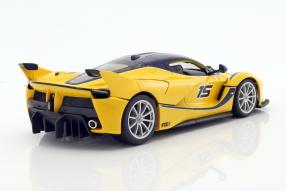 Bburago brings a real bang in the tradition, in which the brand from Italy  caused a sensation with the model cars to the Ferrari F40 1987 and made the scale 1:18 socially acceptable: The latest model is called the Ferrari FXX-K, The super sports car, which, according to the manufacturer, is designed without compromise and is equipped with technological innovations that guarantee the exclusive customer an unprecedented driving experience; Customers who are also test drivers and who should carry out a special program with the "prancing horse" in the two years after its first presentation at the beginning of December 2014. The FXX was presented to the public for the first time in 2005, based on the Ferrari Enzo and was designed as a single-seater in the consciousness, as it was mentioned at the outset, in order not to receive any road approval.

However, if desired, a second seat was installed. The Italian small-series label BBR last year impressed impressively beautiful, with 1.199.95 Euro but also impressively expensive Modellautos before the FXX K in 1:12 scale, but Bburago remains loyal with 39.95 euros per piece of his clientele and offers a lot Details, thorough workmanship and a stunning look for relatively small money in 1:18 and a length of about 27.2 centimeters. Doors and hoods are fully functional. The collector will have a fantastic insight into the cockpit designed for the model with an acceptable instrumentation and surface feel. We expect this model to be a signature version, which can be a little better, but will charge a price.

The technology: Doesn't get better

The two pictured miniatures, painted in Giallo Modena (item number 18-16010Y) and Rosso Corsa (18-16010), are part of the Race & Play collection, where the finish of the body, the correct reproduction of lines and structures as well as the Look no further. Let's look at the details of the model. The "K" in the name Ferrari FXX K stands for the KERS, the Kinetic Energy Recovery technology, which increases the performance in the Formula 1 to maximize performance on the track. The drive set on the model is 772 kW / 1,050 hp, whereby 633 kW / 860 hp of the twelve-cylinder in V-arrangement with its approximately 6.3 liters displacement are beteteuert. 140 kW / 190 hp comes from the electric motor of the hybrid system. The three-dimensional replica in the model offers a good overview of the demanding engine.
Together, the system provides 900 newtonmeter (Nm) of maximum torque, and has a new camshaft, revised valve control and post-machined intake and exhaust channels, as opposed to the original FXX and its October 2007 evolution. The Hy-Kers system has also been updated and offers four options: Qualification to get the maximum power, Long Run to guarantee the consistency of the power over a longer distance as well as a setting for the manual boost for immediate recall of the maximum torque. With FastCharge is the fast charging of the battery in the foreground. The search for maximum efficiency led to an update in aerodynamics. This includes moving wing elements at the front as well as a wider diffuser at the rear.

Model car with its own dynamic

By diverting air around the car and the sills, an increase in output was achieved by 30 percent: 540 kilograms more output. It was a car that had been designed without compromise, Ferrara said to the FXX K. The performance that this car unfolds is also reflected in the model carousels, with cool and exemplary lines and highlighting the front spoiler lip For optical dynamics. Bburago has very well reproduced the chassis, the bow apron, the mordlicher diffusor at the rear and the all-encompassing engine cover underneath the doors. Yes, this Ferrari FXX-K is a legitimate successor of the famous F40 and therefore a must for any sports car collector.