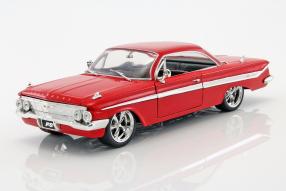 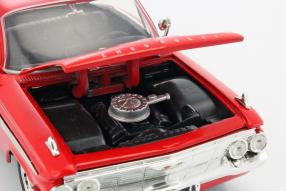 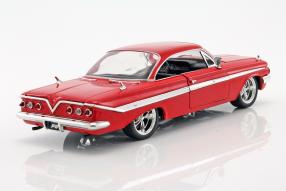 Shortly before Easter, a very special hot model car has arrived: the Chevrolet Impala vintage 1961, with the figure Dom Toretto in the film "The Fate of the Furious" on the road. Jadatoys was the first label to secure the rights to market the respective model launches from the latest Kinofilm of the "Fast and the Furious" series, which has been successful for 16 years, and offers the miniatures of the film cars in merchandising in time for the Kinostart and partial weeks before . This in toy quality and first in the 1:24 format, but largely with doors and hoods to be opened as well as replicated engines. The 1961 Chevrolet Impala offers a genuine interior design and many details under the bonnet, but the trunk lid also works.

Plenty of chrome, lots of power

In his fiery red, the model of the Impala looks exactly like a streetcruiser in Cuba. Exhilarating shapes, richly decorated with chrome on the trim and the grille, the same naturally high-gloss on the American racing rims, which are tucked under the mudguards with a lowered chassis. The taillights tell a story that has long since been forgotten; A bulky seat in the interior suggests that sideholding was not a development criterion during the driving time. We recognize robust model construction technology on the body as well as in the engine compartment, which effortlessly holds the attack of finest sand grains when playing in the garden stand. The car will have a capacity of 294 kW / 400 hp in the film; The V8 draws its power from a cubic capacity of 6.7 liters.

The powertrain is switched with a T-10 four-speed manual gearbox; With a crisp gear shift lever also in the model, which can not be lost as quickly as the fragile-looking shift head of a Mercedes-Benz 230 SL from 1965 by Norev in 1:18. Jadatoys in the 1:24 scale - this is just toys, as it should be, as kids in the sandbox and fathers in the showcase equally joy. As generations as the 136 minutes and director F. Gary Gray staged feature film itself. With this article, the blog goes to the Easter break: On Tuesday, it continues with a fresh post. If you like, you can follow us through our Twitter account through the weekend of Formula 1 in Bahrain. Have a good time, be fine! And - have fun in the cinema!

Here: Click on this link to the overview of our modellautos for "The Fast and The Furious"