In addition to the sports cars of the Procar series, the BMW M1, the Aachen model makers are currently actively working on its predecessor, the BMW 3.5 CSL. 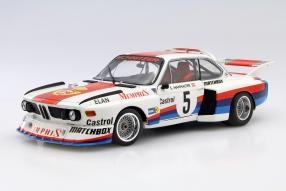 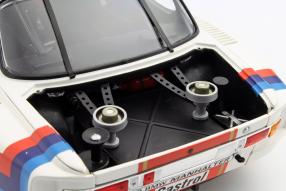 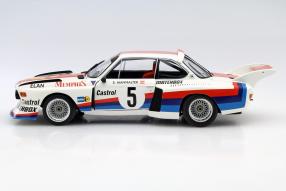 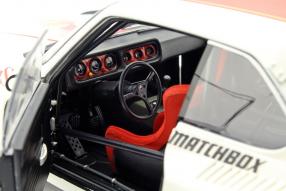 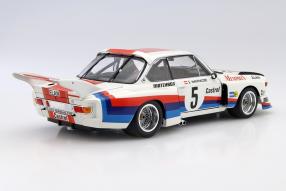 Minichamps is well known to us all as a moving company, which seems to track any gap in the global model car market. Just last Tuesday we had the BMW M1 of the Procar series by Marc Surer to the blog, to which Paul G. Lang and his team currently delivered versions in pure yellow as well as in the colors of the car from Elio de Angelis. But now we are taking a step back, more precisely two years before the appearance of the M1: As early as 1976, but also in 1977, the Bavarian coach with the BMW 3.5 CSL celebrated great success in motorsport. Victories at Zeltweg, at the Nürburgring and Daytona secured the international E9 Coupe version of the E3 series of international recognition: the basis for developing the BMW M1.

BMW 3.5 CSL in the focus of Minichamps

From the BMW 3.5 CSL, Minichamps has just released a whole series of Modellautos in a 1:18 scale. For example, the quartz / Nilsson driver's car, which was painted green by our Modellauto News team, was released in a limited edition of 1,002 copies. We introduce you here a slightly more rare, because only 300-fold-up model car, which was piloted by Sepp Manhalter on the top podium places of the race Havirov International 1977. The model incorporates the 3.5 CSL, which was created according to the regulations of group 5, which left a lot of scope for the racing stables and designers: the ultramodern fenders and monstrous bow and rear spoilers also cool fans of today.

The socks, however, are the replica of the legendary engine, the straight-six cylinder with the knowledgeably reduced intake manifold, the exhaust manifold and the very nice valve cover for BMW. Cabling and liquid containers, spark plug plugs and cables round off the good impression of the elaborately built model car - all very well to visit by the detachable bonnet. The model brings out 324 kW / 440 hp from a 3.5-liter displacement, driving a maximum of 275 kilometers per hour. To accelerate from zero to 100, the race car needs 4.0 seconds. By the way, factory wagons with an additional turbocharger managed to reach 308 kilometers per hour and were known for the enormous tire wear. After 64 laps, they were driven downwards during acceleration due to spinning wheels.

Tire-retarding all-wheel drive was really effective in the motor sport only later with Audi. The bodywork of the 3.5 CSL is a first-class model, which is exactly the same as the legendary model. In the interior, the situation is currently poor; According to the regulations, the dashboard of the series has been preserved. We also know the side panels and controls from the series coupés of the E9 series; The racing platform seat and the roll-over rod - one can not speak of cage there yet - are motor racing pure. We love this model whose model of the Memphis International team won the race in the Czech Havirov on 22 May 1977; Driven by the Austrian Sepp Manhalter, who supports his grandson Matthias today in Kartsport.

Click here: The BMW 3.5 CSL Quester / Nilsson in the shop