High-quality model cars at a really fair price to deliver, the French characterizes from Vaulx-en-Vaulin. We test the 911 in scale 1:18. 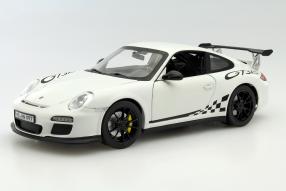 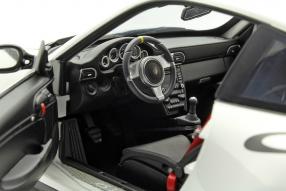 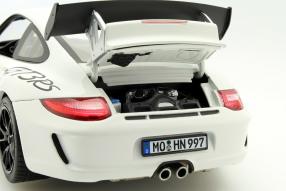 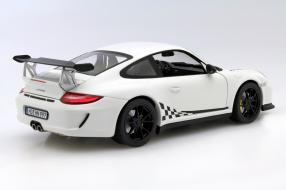 Regular readers of our blog are familiar with the model's concept of Modellautos of the Norev label from France: the miniatures of the series Collectors really offer a lot of money for the money of the collectors. This also applies to the case of the Porsche 911 GT3 RS of the 997 / II series, which Norev offers in white outer lacquer under the item number 187561. All-opening doors and hoods, a perfectly harmonious appearance in the appearance and a comprehensive, high-quality equipment with decorations and imprinting also characterize this model car of the 1:18 scale. The model comes from the year 2010 and draws the athletic spearhead in turn, which already has the facelift of the perhaps most beautiful neunion of the modern era.

The features of the facelift

This can be seen at the first glance at the rounded turn signal lamps in the front apron as well as at the sharpened LED taillights at the rear. The air inlets were also revised. The 997 in the original version was presented in 2004 and enthusiastically received, because by the design of the main headlights by Designchef reintroduced the era of the mirrors lamps and again looked like a real Porsche 911. Unforgettable: His 997 debut in Speedgelb on the TV series "Die Gerichtsmedizinierin" with Lisa Fitz on RTL. Technically, the 997 used not only the platform of the predecessor 996, but the whole body. On this, only the attachments were changed: The 997 was actually anyway only a very extensive facelift.

Basic data: Much power under the hood

Vehicles with the abbreviation GT3 RS are designed as basic vehicles for customer service and are blessed with a particularly high performance. The output after the model revision offered the buyers 331 kW / 450 HP from 3.8 liters displacement. When we open the bonnet of our model car, we find an attractive dummy of the six-cylinder. Of the dry sump lubrication with an external oil tank and the sequential fuel injection of the model, we do not see anything, and can not feel anything from the 430 Newtonmeters (Nm) maximum torque, but the multi-colored version of the Modellauto drive set looks much fun. The sheet metal structure on the underside of the hood is just the same as the filigree design of the supporting elements of the fixed rear spoiler.

Very well elaborated were also the ironing handles of the small nine-finger, which not only simply engraved, but very lovingly made look. The appearance of the interior also exactly matches that of the faucet panel, center console and seat of the model. Pedals and seatbelts are very well modeled. The model car of the 911 GT3 RS is priced at 59.95 euros in the price list and also offers a coherent design of the linings under the bonnet. We really wonder how Norev can make such good model cars so popular at such a fair price, but we are also pleased that the French will remain in this manner faithful . So an A+ for the GT3 RSand a big thank you to Norev.