24.06.2015Lamborghini Veneno by Kyosho and AutoArt in comparison

Kyosho and AutoArt - big names in model car buisness . We will find out which of them is the better one in reconstruction of Veneno 1:18 . 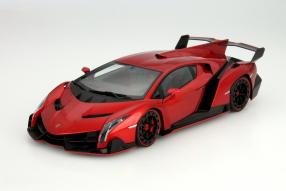 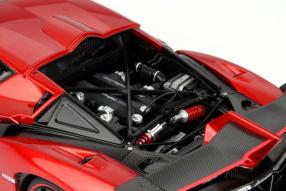 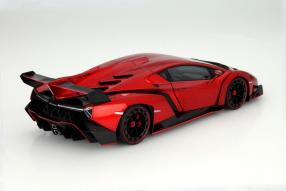 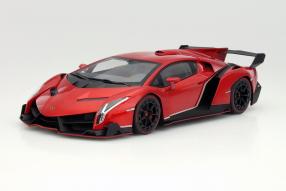 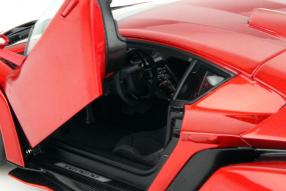 Several times loyal readers of our blog have read the term small artwork relating to described model cars.There are many top quality made model cars; but some are still a bit better in such detail that they deserve to be called "artwork" . This category also includes the two  1:18 scale model cars of Lamborghini Veneno by Kyosho and AutoArt. They resemble the supercar, which was presented as a coupe at the Geneva Motor Show and Accessories on march 5th 2013 . The car was developed for the occasion of the 50th anniversary of Automobili Lamborghini and is based on the Lamborghini Aventador; relieved however of 125 kilograms to 1,450 kilograms total weight by the use of components made of carbon fiber.


The performance dates of the Veneo are impressing


The  model is  named after - according to the tradition of  Lamborghini  -  a Spanish fighting bull named Veneno which the bullfighter José Sánchez Rodríguez killed in 1914 during a bullfight in the arena of Sanlúcar de Barrameda. The way of picking names for the models is probably not for everyone.  Fact is however that the engineers at Lamborghini increased the power of the twelve-cylinder of Veneno  by 37 kW: The car makes 552 kW / 751 hp. Its power  is at  1.93 kg / hp. The acceleration from 0 to 100 kilometers per hour is given as 2.5 seconds;  the Veneno reaches  the maximum speed of 355 kilometers per hour.  There has only  been 3 Veneos; its price was 3 million euros plus sales tax.

The  fans of the model car in 1:18 scale get their Veneo for a lot less. The more expensive version is offered by  AutoArt , the almost 28-centimeter-long model car costs 239,95 Euro and is  available under the item number 74508 . The Veneno from the production of Kyosho, which is available under the number KYO9501RM is only 79.95 Euro. A  difference that is immediately recognized. But we also notice right away why there is such a difference in the price ;  Kyosho has decided against the usual  opening doors and hoods. AutoArt, however, is offering  swinging doors that open and view  the interior and an opening hood which shows you the fine work on the engine compartement, which shows you  perfect artwork.


Both model cars have prototypical bodies


A look at the body shows - very easy to see in the above video set for a comparing test - that both Kyosho and AutoArt have the proportions and the look of the model accurately taken and implemented in the so called Bburago scale. All details, the outer skin, the splitter and the structure of the diffuser in the rear  were implemented prototypically. When closed,  there is no difference in our opinion. All contours are alike ; something you can well understand by watching  the video. The smooth underbody ends in an elaborate, martial-looking diffuser which covers the 4 voluminous tailpipes separated by a splitter. The jagged design around the hood reminds you  of cars from the Batman comic series.

These details like the contours and lines of the doors, the sills and the headlights are met exactly by  Kyosho as well as AutoArt . The collector should not underestimate the effort  to implement this design in die-cast zinc. We think this justifies  the prices; especially when doors and hoods can be  opened. This leads us to the interior. The interior is well implemented in the model of both makers alike. The instrument panel with the instruments, the design of the lightweight bucket seats  and the door linings are just as well made by Kyosho as  by  AutoArt, only that with AutoArt the doors open and the details can be viewd better.  A plus is  the sill and the center tunnel, for since that model shows its carbon fiber structure.


Who will win the comparison?


In the area of the windshield wipers and the design of the replicas of wheels, tires and braking technology both model cars are on the same level. The glazing fits perfectly; but who would have expected otherwise. But who is going to win the comparison now, which one  is the work of art among works of art? Conclusion: price / performance winner is the Lamborghini Veneno from Kyosho, as it provides a bunch of details and perfect skin at an unbeatable price. Detail and quality winner is the Lamborghini of AutoArt which gives you not only the insight on the interior but also has full working steering . Both are great: The video may help your  decision to purchase.