3,067 Smarts met in the city of Hamburg on the end of August. Norev has prepared a new model version of the Fortwo 1:18. 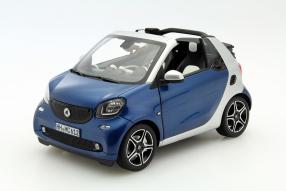 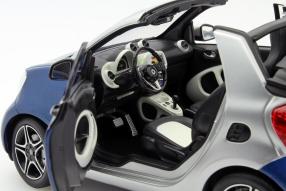 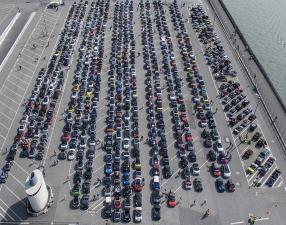 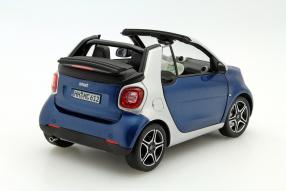 The Smart Fortwo in its current generation is not new to our blog. Norev but brought just in time for the 16th Smart Times a new edition in the attractive color combination Midnight Blue Metallic / Cool Silver Metallic on the market. The model car in 1:18 scale is available under the article number 183 438, comes with a powerful processing and provides a lot of high-class craft made details around instrument panel, seats and side covers. We do not know whether there has been the model already on the 16th Smart Times-meeting, which was for the first time and held on 26 and 27 August 2016 Hamburg in Germany, but we can imagine that in his quality and goes to the heart every fan in the finish, likes the small cars from large Daimler Group. Besides the faithful interior detail, the model provides a detailed engine compartment and to open doors and hoods.

Total 3.167 Smart fans from around the world traveled to Hamburg to celebrate her little car. The community transformed the grounds of the large market in a festival of the so-called urban lifestyle - with music, street food, smart flea market, a vehicle course and a visit of the two beach volleyball gold girls Laura Ludwig and Kira Walkenhorst. The highlight was the traditional closing parade: 1,635 vehicles rode in a motorcade through the streets of the Hanseatic city. This is not only much - this is the new record of the event, as already mentioned had its 16th edition. was beaten with the 1635 Smart the previous high of 1,427 vehicles in portuguese Cascais two years ago. 2017 is the Spanish town of Salou host the smart community.

the unique and annual meetings smart friends from anywhere since 2001 attracts the world in a different European city. For a whole weekend they share their passion for the city car and the spirit of the brand with each other, exchange ideas with designers, tuners and experts and explore together the respective host city. However, the Smart also for trips to the region to get different music acts offered live. This year an exit to St. Peter-Ording on the agenda, where the smart fans moving in the footsteps of the stars of the television series "Against the Wind", Hardy Krüger jr. And Ralf Bauer.

The evening parties and live performances by local and international artists were joined by the successful German volleyball team Laura Ludwig and Kira Walkenhorst. Particularly exciting for participants and interested visitors from the City: The area around Hamburg Wholesale Market presented itself as a promenade for automotive passion and creativity. From smart as "Papa Mobile" on the city car in bright pink or imitation wood through to thoroughbred racing and a versatile terrain smart 2,053 vehicles locally showed impressively the almost endless possibilities for customization of the cult car. was also presented its new service offering "smart ready to drop." Tests with current smart and a vehicle-course rounded off the appearance of being smart.

And finally: We wish you as always at this point a fine weekend and have fun with your small and large cars. Drive carefully and stay healthy !!!