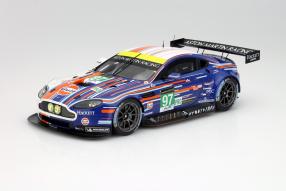 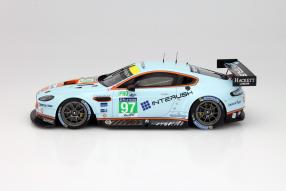 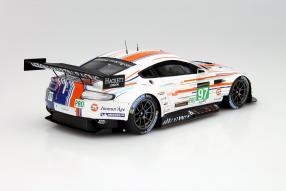 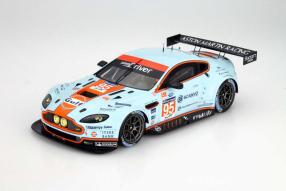 The famous small series modelcar label Spark is  currently doing everything possible, for fans of the 24 Hours of Le Mans, to create the ideal setting to enjoy the long distance classic . In  form of many new products of  models from the starting field, the stragglers of the last places will  appear one after the other  in 1:18 scale. Now it's the models of the Aston Martin Vantage GTE and AMR Aston Martin Vantage V8 turn that will be out in time for the 83rd edition of Le Mans, awesome  cars. Model cars that you have to have, really, if you like great technique details. Spark brings the car of the driver pairings Darren Turner, Peter Dumbreck and Stefan Mücke  from 2013 and Darren Turner, Stefan Mücke and Bruno Senna, who were traveling in Le Mans in the Aston Martin Vantage V8 in 2014.


Turner, Mücke and Senna started at the 82nd edition of the 24 hour race in Le Mans in class LMGTE Pro with the starting number 97 and after 310 laps ended up on the 35th place in the overall ranking.  The Audi Sport Team Joest won the race, the Audi R18 also starts at the upcoming race. The Aston Martin Vantage GTE AMR, that  Spark is bringing out available under  item number 18S154 is the one that started in 2013 with starting  # 97 and drove 314 laps to 17th place;  Again  2013 was won by the Audi Sport Team Joest. But  now let's take a closer  look at the really great Aston Martin.


Great details like the headlights in the middle of grill


The miniatures were made of resine plastic, because this polyurethane resin makes fewer demands on the mold and small series  can  be economically viable. The car from 2014 available  under item  number 18S153  as well as the one from 2013 each cost 149.95 Euro - which is a fair price concerning the quality. The headlamp battery with the two lights in the center of the grill testifiy  great attention to detail from the mold engineers. The way how  detailed  the sills are prove that as well.Spark has already presented their skills with the Prosche 919 as well as with this model  in carrying out the cockpit design and the details contained.


The third one is also  great work of art


The cockpit of the Aston Martin is also an eye catcher. The painting of the two racers is could have not been done any better; the decals present themselves razor sharp and applied without blemish. Rear spoiler and diffuser draw the carbon structure precisely; the rims of the scale 1:18 are just as much art as the windshield wiper. That fact that Spark does not miss any antenna is well known to the fans of the models that come from Macao. We believe that these vehicles as well as the Aston Martin Vantage with the starting number 95 of 2014 (group winners LM GTE AM, David Heine Meier Hansson, Kristian Poulsen, Nicki Thiim, 19th place after 334 laps in the overall rankings Model 18S152) are genuine small works of art in finish and overall impression, and actually better suitable  than any othe car to the  24  hours of Le Mans; in addition to other models of course which we gathered in the bar at the bottom for you .