23.06.2016#throwbackthursday with Ottomobile and the Citroën Ami 8

A little French friend for the showcase are introduce by the French. We look back to the year 1974. 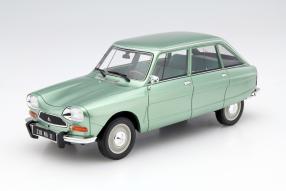 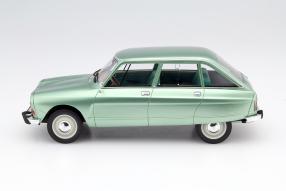 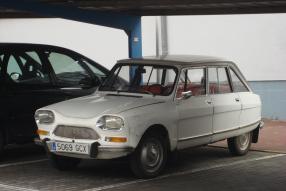 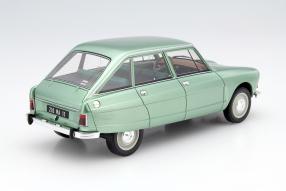 Today we have to smile, because apparently there are nowhere variety worlds so close together as in our little blog. Yesterday we write about the Mercedes-AMG S 65 with a powerful V12 under the hood - today it is a two-cylinder, which draws our attention (!). We are talking about a car that has from 0.6 displacement develops 24 kW / 33 PS. Only the top version had a four-cylinder, from which 1.15 liters capacity 40 kW / 54 PS arose. We are talking about Citroën Ami 8, which was manufactured from 1969 to 1978 based on the Citroën 2 CV, so the duck and has the Otto Mobile set a worthy monument with a technically excellent model car. #throwbackthursday - we therefore look back.

The Citroën Ami 8 is considered Car of the lower middle class, roughly comparable to a VW Golf or Citroen C4 today. The amiable-looking automobile was available as a four-door hatchback and as a baptized in the name Break wagon and heard internally on the name AM3. Total 800 735 copies were made of it. From painted in silver color green model, there are only 999 pieces; it reduced the status of the model from 1974. doors and hoods are not open to the car model produced resine plastic, but it makes up the appearance, the lying, the miniature. Because this is not to exceed in terms of finish and appearance.

transfer curves of a model which is always a challenge for the engineers form. And the Citroën Ami is a single rounding basically. This begins with the hood, which is deeply pulled down and carried the fenders upper edges to outstanding Peilkanten. But the roof edge and the hatchback are more round than square. Very nicely modeled engineers have embedded in a chrome bed spotlights. The interior is lovingly recreated, albeit sparse and thus the state of the time equipped accordingly. A highlight: The wood steering wheel. In short, the little Citroën Ami is a great model for Friends of the French way of life, that a note 1 is replaced and thus quite advisable for Liäson.

But what is now with our look back into 1974? Now, the model itself is such a, because to be content with two cylinders and to be happy, that was long afterwards no longer hip. Today three cylinders are again common commodity, and the two-cylinder logs back again, is the Fiat 500, the Alfa Romeo Mito and the Lancia Ypsilon installed. And what in 1974 was otherwise? The oil crisis was just behind us; the time of government Richard Nixon and Willy Brandt ended by Watergate and Guillaume. ABBA won with "Waterloo" Grand Prix d'Euro Vision Song Contest; Carl Douglas sang "Kung Fu Fighting". King Football ruled then as now: Germany contributed from the World Cup and was also world champion in its own country. Beautiful memories, right?