TSM delivers us with a unbeatably good model car 1:18 scale diecast in form of the third place from the 24 hour of Le Mans 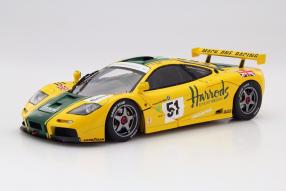 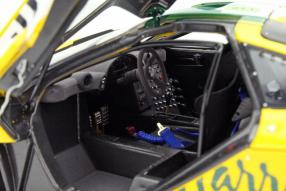 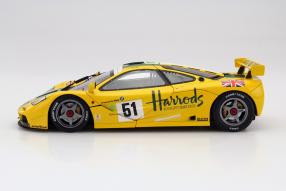 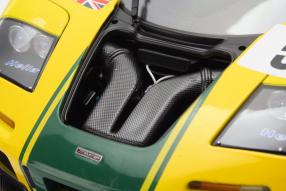 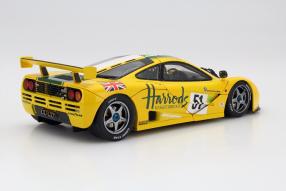 No, not resine plastic, but from die-cast zinc and thus with opening doors and hoods, the model car was made with the example of Andy Wallace, Derek Bell and Justin Bell for the team Harrods Mach One Racing the 3rd place in the 24 Hours brought from Le Mans 1995th The limited edition of 3,000 units Model car is available under item no TSM131807 and offers numerous features: It comes with a faithful interior detail, a detailed engine compartment, steerable front wheels and as mentioned opening engine bonnet, working doors and trunk lids. Look and appearance of the model fit perfectly with the appearance of success not only in a prototype version, the famous fathers.

106 of the world-famous by the driver's seat in the center of the super sports car is McLaren Automotive Ltd. built in the years between 1993 and 1997. In no other three-seater the driver's seat was positioned centrally; something to the designer Gordon Murray was inspired from racing. Murray gained world fame through his previously working as a designer at the Formula 1 racing team Brabham. The body of the McLaren F1 was made of carbon fiber-reinforced plastic - manufactured and designed with practices in Formula 1 according to the monocoque - short CFK. This had never been previously applied to a production vehicle, only with extremely great technical effort and high production costs that was feasible.

He managed what noone previously succeeded

28 of the McLaren F1 racing cars were converted as the category GT1 according to the FIA regulations; 6 more remained prototypes. Main fields of application for the McLaren F1 GTR was the FIA GT Championship. A huge success celebrated the vehicle in the form of overall victory of the 24-hour race of Le Mans in 1995, the same time his debut has been at the Sarthe for the McLaren F1 - something that had previously made no vehicle. The 3rd, 4th, 5th and 13th place went to the F1 also. A sensation that McLaren celebrates by transferring the then applied paint still on the successor models as the P1 GTR. Engine designer was Paul Rosche, who has already worked for Brabham-BMW with Murray and turbo engines for BMW designed with which Nelson Piquet 1983 F1 world champion was.

McLaren resorted for the F1 to uprated V12 of the BMW brand, although it continued in Formula 1 with Mercedes-Benz. The power spectrum of the 6.1-liter engine in F1 extending from 461 kW / 627 hp to 500 kW / 680 hp. Let at this point to look at the model car set. Its drive technology is by the broken - trace engine room ventilation and by the view of the rear window well - so durchsehbar designed as a real grid. At the front, the air ducting excited under the front hood. The scissor doors are wide open and allow a view of a careful reconstruction of the interior dates. Inspire The control panel with many switches, but also the seats and the belts Gurtlaschen.

True Scale Miniatures on the way to no. 1?

In Finished, it is just like the McLaren by Gerhard Berger in 1991 or the P1, which we introduced in accessible via this link articles: top notch through to the very last little screw, this is the model of the McLaren F1. The monocoque was faithfully implemented in the so-called Bburago-size, the replicas of the alloy wheels and the brake system are top class.

We get, by viewing the McLaren, the impression that True Scale Miniatures is on the immediate way to the top among the modelers - and with an unbeatable price for the detailing of now EUR 149.95. McLaren Automotive Ltd. provides great video for F1 is available, to which we have a choice for you. This will be our final word to start your Friday: We wish you a nice weekend.