23.11.2021“Vigilante” Bernd Mayländer, who is also in his 20th year as the official driver of the safety car, and his company car

Mercedes AMG GT-R as safety car in scale 1:18 by Minichamps 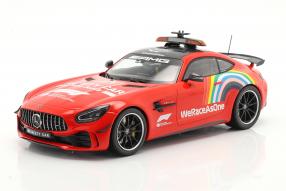 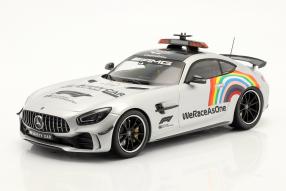 Minichamps presents the Mercedes Benz AMG GT-R, which was drive by Bernd Mayländer in the 2020 Formula 1 season. The model in scale 1:18 is available in five different versions in our shop. The red model, which was used at the Tuscany GP in Mugello, the 1000th Grand Prix for Ferrari, is not only available in the original Minichamps packaging, but also as a limited edition in the Mercedes Benz factory outer packaging. For those who like it exclusive, we recommend the model, which is limited to 333 pieces for ck-modelcars. In addition to red, the model is also available in silver. Here, too, both in the original Minichamps packaging and in the exclusive Mercedes Benz factory outer packaging. All models have steerable front wheels and the level of detail is based on the original model in a way that we do not know otherwise from Minichamps.

Of course, it is optimal for a race if there is no reason for the use of the safety car. However, if there are vehicle parts on the track, or if bad weather conditions make it necessary, then it is Bernd Mayländer who drives the Mercedes-AMG GT R and merges the field so that the track can be cleaned or the field can be compressed. Mayländer has been driving the Safety Car since 2000 and had already covered around 700 laps in this role by the middle of the 2018 season. With its 430 kW / 585 hp and top speed of 318 kilometers per hour, the Mercedes-AMG GT R has been the most powerful Formula 1 safety car of all time since the 2018 season. From the list of optional equipment from Mercedes, Bernd Mayländer's company car has the AMG Track Package with rollover protection system and ceramic high-performance composite braking system on board.

For Formula 1 fans it is a familiar picture for 25 years that a Mercedes AMG is holding the field together during a safetycar-phase. Even the silver paintwork is a recurring element in the traditional history. In the season 2020, however, the look was adapted so that various prominent campaigns could place their lettering or logo on the AMG GT-R. In addition to the Formula 1 “WeRaceAsOne” campaign, which with its rainbow stands for sporting commitment to diversity and integration, there is also space for the call to “Drive safely” on the hood of the AMG-GT R. The campaign calls for considerate driving in road traffic. But regardless of whether it is red or silver, the AMG GT-R from Minichamps clearly feels at home in a showcase next to a few Formula 1 models. 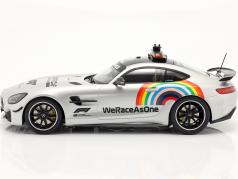 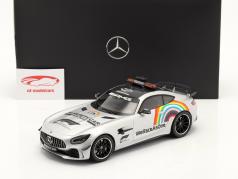 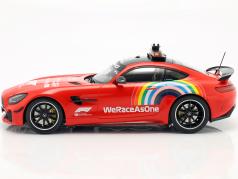 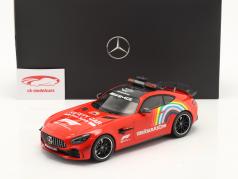 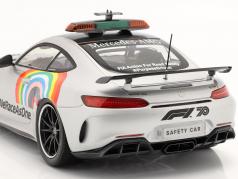 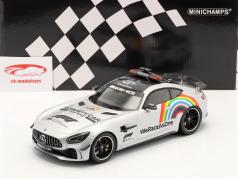 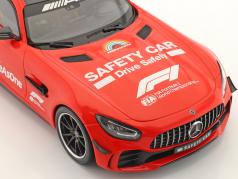 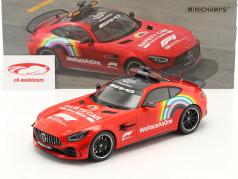