From 28 November to 06 December 2015, the Essen Motor Show is the Mecca of all car lovers. Ck-model cars is there and brings many novelties with. 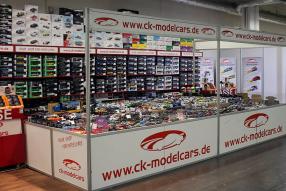 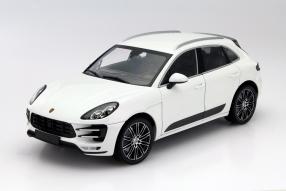 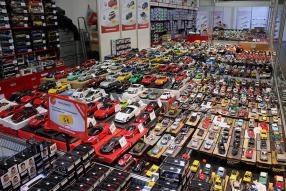 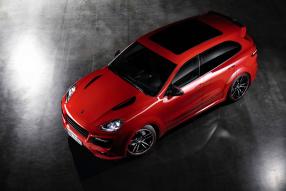 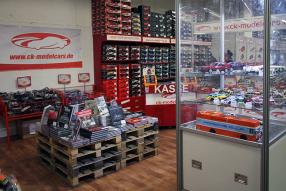 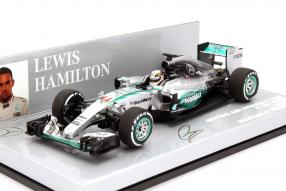 In 1968 debuted the "1st International Sports and Racing Car Exhibition Essen", which is now more successful than ever Essen Motor Show. Wolfgang Schoeller is the genius who has then called as fan at the tender age of 25, the legendary exhibition with the emphases car, motorsport and tuning, vintage and classic cars launched and coordinated today: 105,000 square meters full of current and historic racing cars, contemporary automobiles, crazy Crazy Cars, accessories and model cars naturally attracted since its launch more than 10.5 million fans to the exhibition halls in Essen-Rüttenscheid. The exhibition is considered as the intersection of fans, business, motorsport associations and race organizers, which of course ck-model cars should not be missed, to face your questions and to show the latest model car.

New Releases for the start of the Essen Motor Show

On Preview-day of Essen Motor Show Minichamps comes out with a very important new release: Lewis Hamilton's racing cars from Mercedes AMG Petronas F1 Team in the look of the race in Malaysia in 1:43 scale will premiere at the Aachener program. Coinciding with this: The official car of Nico Rosberg, who indeed could snatch the title of Vice World Champion.

For fans of the brand Porsche bring ck-model cars and the Porsche Macan Turbo modelissimo exclusively manufactured by Minichamps and Porsche 918 Spyder with opening doors and hoods in a beautiful white and 1:18 scale. Both, of course, in strictly limited numbers, so there is a way for food alone is worth so. This also in view of the other model cars, which has ck-model cars made there: Take a look at the pictures of this article! Incredibly, right?

The Essen Motor Show puts traditionally motorsports in the foreground. Thus, the brand new model car to Audi TT Cup matches in the presentation version to 2015 well into the offer. Spark has very detailed implemented the cars in a scale of 1:43 and as always delivered good work; Incidentally, even with the painted in Tango Red new Audi A4 Avant.

In Essen, there are not only the model, but also - in short - all cool new releases. The here, for example: Techart presents the Magnum based on the Porsche Cayenne an independent and powerful styling program for the big four-door model from Stuttgart. Over 1,200 sold Techart Magnum in 3 generations of products based on the respective Cayenne model years made this series a classic example of the individualization of premium SUVs.

More PS for the Cayenne

In addition to the optical revisions are currently 3 power increments provided for the Techart Magnum available. The increase in power amounts to the base vehicle Cayenne S Diesel with the power kit TA058 / SD1 to 26 kW / 35 hp and the Cayenne Turbo to either 59 kW / 80 hp with the TA058 / T1 or powerful 132 kW / 180 hp for the TA058 / T2. Just one of many other examples to which exceptional cars are seen at the Essen Motor Show.

Whether it is true that the Peugeot 308 GTI is the fastest GTI of all times? In Hall 3 at booth A150 you will find the answer. In the same hall also shows the Techart Magnum. In addition to the cars on the exhibition stands, there are to visit numerous special shows: Loud motorsport action in Hall 7 or a Concours d 'Elegance in the Hall of Classic Cars.

Events at the Essen Motor Show

The final of the Gymkhana Drift Cup 2015 is announced In the DMAX Motorsport Arena. The Europe-wide unique drift competition demands the drivers' utmost vehicle control from - and brings you with spectacular stunts to amaze. In addition, the drift-taxi is ready: It drift the most daring among you fans on the slopes. "Show your car in the best light!" - Under this motto Germany tuner Elite their prestigious vehicles: 10 cars face after preselection by a jury for the finals.

The special feature of the Hella Show & Shine Award's: All participating vehicles comply with the Road Traffic Licensing Regulations of the respective country. But a very special special presentation should focus on: The Formula 1 celebrated with a large exhibition at the Essen Motor Show their 65th birthday. We'll keep you in the coming week to date.

ck-model cars can be found at the Essen Motor Show in Hall 9.1 Stand 134