This week, Greenlight presents modelcars in scale 1:18, which are reminiscent of a famous television series from the years 1984 to 1986 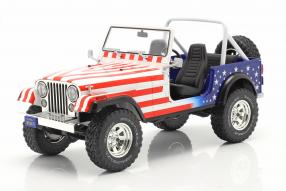 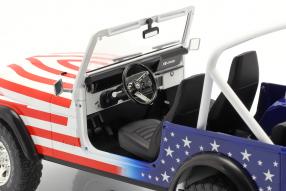 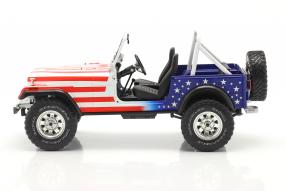 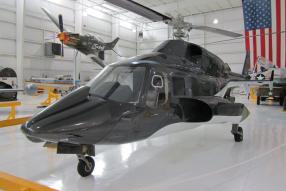 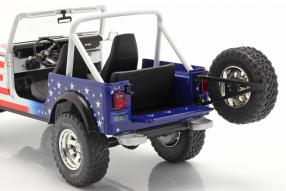 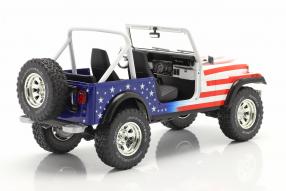 The modelcars to the Jeep CJ-7 Santini Air from Greenlight are miniatures whose role models are screaming to make it into the series of articles for Throwback Thursday. The scale 1:18 models reproduce a vehicle that appears in the paint scheme from the television series “Airwolf”: “Airwolf” was a story about the secret, supersonic attack helicopter of the same name, which was operated in three seasons with 55 episodes was told; broadcast from 1984 to 1986. By the standards of the time, the series was so good that it really fits Throwback Thursday: Under this hashtag, the Internet community remembers past, often positively viewed events or television series. And today it is the model cars for the Jeep CJ-7 that are sold under item number 19090.

The miniatures reproduce the Jeep CJ-7 from the year 1982. Greenlight did not only get the appearance of the oldtimer very well, but also his own paint scheme in the stars & stripes design, i.e. the US flag, which is prototypically given on the way to the collector. On coarse-tread tires from Goodyear, fans can look forward to a removable hardtop that comes with the models in the same look. The dashboard has been meticulously recreated; the steering wheel makes you want to pack it and head straight to the Santini Air airport. The spare wheel at the rear can be swiveled sideways; The collector can fold down the drop side behind it. The doors with the name of the small airline can be inserted by the buyer of these diecast models; thus the body would be closed.

The holder of the role model for these miniatures was Dominic Santini, portrayed by Ernest Borgnine. The actor won an Oscar in 1956 for his leading role in "Marty". He is the paternal friend of the main character Stringfellow Hawkes, was the best friend of Hawke's father and took care of him after his father's death. Santini operates the small airline Santini Air on the one hand, but is also the copilot and weapons technician of the Airwolf helicopter. Unlike Hawke, Dominic Santini is a very open and warm-hearted character, who, however, also likes to fool around. The Jeep CJ-7 was built in the basic form in which Greenlight now shows it, since 1944. It had a longer wheelbase than the CJ-5 and was available with up to 4.2 liter gasoline engines.

Not our topic at all, but interesting in this context, is the helicopter from the series, which Universal Studios equipped with numerous dummies of dangerous weapons and a jet engine; none of it has ever worked. After the end of the series, Universal kept the Bell 222, which was built under the serial number 47085 and registered under the ID N3176S, for further productions. He was then sold to Germany. Until 1992 he flew with HSD-Luftrettung under the identification D-HHSD as an intensive care transport helicopter and crashed after a flight from Berlin to the University Hospital Cologne on June 6th, 1992, over the wooded area of the municipality of Bestwig in the Sauerland on the return flight through a thunderstorm. An American serial hero who carries out everyday rescue flights in Germany, if that is not a strong conclusion for this article, what then?

Here: Click to the miniatures of the Jeep CJ-7 "Santini Air"