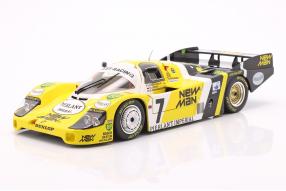 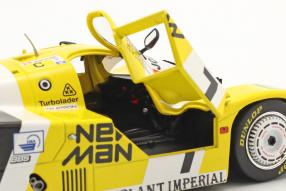 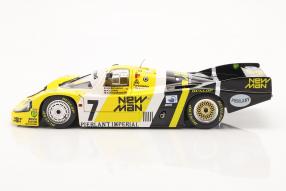 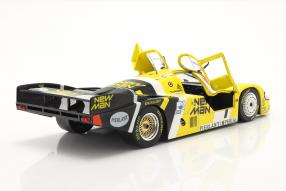 What a Porsche 956B is? Well, actually the same as a Porsche 956 LH, but with the engine of the sports car prototype used from 1984 there is a significent difference and thus the "B" in the designation: Instead of a mechanical injection system, an electronic injection from Bosch was used this season, because the Automobile Club de l’Ouest, as the organizer of the 24 Hours of Le Mans, reduced the amount of fuel allowed for 1,000 kilometers from 600 to 510 kilometers. However, this change had the pleasant side effect that the output of the six-cylinder boxer engine increased to 470 kW / 640 hp. However, Porsche was not really happy with the ACO, because the factory decided not to take part in the race at the Sarthe this year. The customer teams didn't do their job badly either: Seven Porsche 956s were in front!

And at the top of the podium were Klaus Ludwig and Henri Pescarolo with the Porsche 956B from New Man Joest Racing of the Class C1 to which Solido now offers affordable reductions into the scale 1:18. The modelcars are produced from diecast and come on the market under item numbers S1805502 or 421187700 and receive - become absolutely rare in this genre - openable doors on each side. These offer a proper view of the cockpit, which has been recreated according to the prototype. In the opinion of the editors, it is a really exciting development that the label, which is known for its inexpensive modelcars, is taking this step, which significantly enhances these miniatures: There is something to play with while the collector sits at his desk and makes a phone call, for example.

But the view to the cockpit of the pilots is of course an advantage anyway. Appearance, line management and the details like headlights, rear lights and BBS-cross-spoke rims also meet high demands in terms of finish. Thus, these modelcars set a worthy memorial to the successful heroes of Le Mans 1984: Ludwig and Pescarolo won the race in front of 150,000 spectators in hot summer weather after 360 laps despite the fact that Pescarolo had to pits after eleven minutes because of a defective fuel pump. Three hours later: Ludwig came in with problems with the left suspension. These should be the No. 7 remained until Sunday noon, but the lead was enough to win. On average, the Porsche 956B was 204.178 kph fast while it covered the distance of 4,900.276 kilometers.