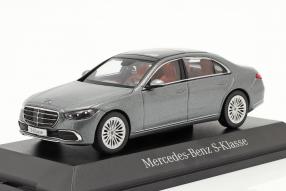 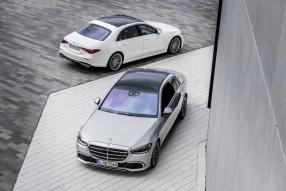 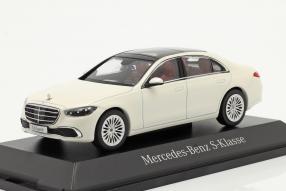 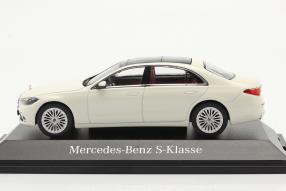 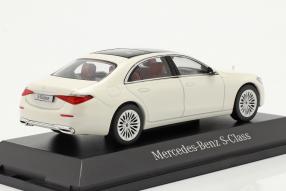 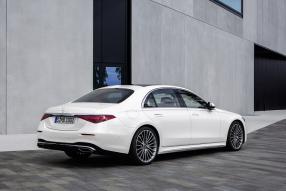 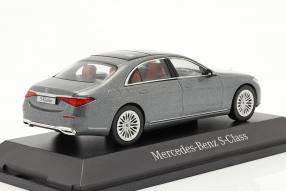 The editorial team of ck-modelcars.de can exactly remember it: In the video, in which the model makers from Dietenhofen presented their novelties at the virtual toy fair 2021 in Nuremberg, a big secret was made out of which car manufacturer from the luxury segment would license their miniatures to become the new top model at Herpa. The new Mercedes-Benz S-Class of the model series W 223 / V 223 became it, and as the both new novelties in designo diamond white bright and selenit grey metallic show, the change to the new cooperation partner was a success. The models appear in the order chosen for the colors under item number B66960632 as well as B66960631 as advertising models, so in the packaging of Mercedes-Benz, in the group-owned in the group's own accessory shops or in selected specialist shops.

On September 2nd, 2020, the eleventh generation of the Mercedes-Benz S-Class was presented. The upper class limousine stands for a long time for the fascination of the brand and defines the luxury segment of the automobile; all competitors will have to be measured against it. The limousine, which is internally assigned the series number W 223, offers a multitude of innovations designed to support the driver in their work behind the wheel. In addition, comfort features have been further developed, such as new active ambient lighting, which is integrated into the driver assistance systems with around 250 LEDs and can visually support their warnings. The miniatures produced from diecast and presented here reproduce the long version V 223, the model of which, at 5.289 meters, is eleven centimeters longer than the base vehicle W 223 at 5.179 meters.

The two modelcars, however, measure just 12.30 centimeters each. But this does not affect the level of detail, which Herpa puts on the day. The appearance of the line management is perfect; the processing is on the high level that experienced collectors expect from Herpa and a Mercedes-Benz S-Class. Plastic parts such as headlights and glass roofs or taillights nestle in the body with excellent processing. The dashboard with the large control tablet, monitors and screens, the decorative wooden parts, every switch, no matter how small, have also been perfectly transferred to the format 1:43 in the interior. As is customary in the industry, the doors, trunk and bonnet remain tightly sealed: the W 223 / V 223 series starts with two 3.0-liter six-cylinder petrol engines with additional electric motors as mild hybrids.

This supported by turbo chargers with electrical additional compressors as S 450 with 270 kW plus 16 kW / 367 hp plus 22 hp as well as S 500 with 320 kW plus 16 kW / 435 hp plus 22 hp. 500 Newton meters (Nm) or 520 Nm of maximum torque is transferred by the engines to the nine-speed automatic transmission and the all-wheel-drive. The S 350d has to do without it: Indeed, the four-wheel drive is there available at an extra charge: 210 kW / 286 hp from six cylinders with about 3.0 liter displacement and 600 Nm included; also equipped with the nine-speed automat 9G-Tronic. This bi-turbo is further to have as S 400 d with 243 kW / 330 hp or 700 Nm. The propulsion ends at 250 kilometers per hour. Our conclusion: Herpa started very well with the perhaps most important series in this segment in the collector's format!

Here: Click to the modelcars of the new S-Class