The fans of historical US-automobiles receive the option to extend their showcases with miniatures from Dodge, Plymouth, Buick and Chevrolet at exceptional prices 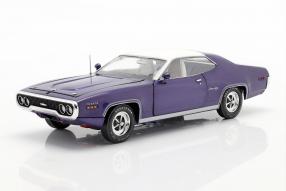 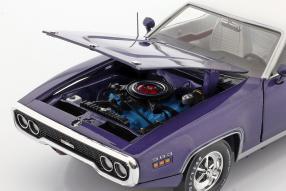 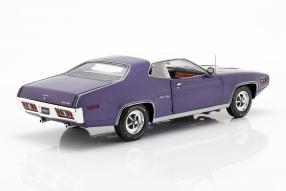 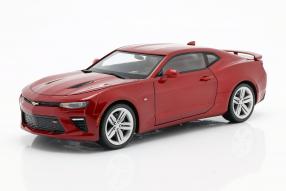 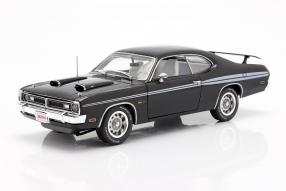 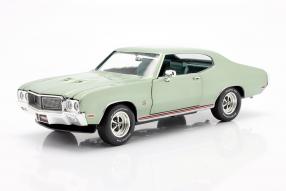 Autoworld is a label that offers high-quality models in scale 1:18 and focuses on the 1970s, but it also cares about current vehicles. The Buick Buick Grand Sport 455 with hardtop 1970 comes first among the tips from our editorial team, which appears under the item number AMM1149 in the series Muscle Car & Corvette Nationals. In the same collection, the miniatures of the Plymouth Satellite Sebring Plus from 1971 roll to the collector (AMM1146). The Dodge Demon 340 1971 in format 1:18 (AMM1062) belongs to the series American Muscle / Hemmings Muscle Machines. But - as mentioned above - Autoworld also produces models of the present as for example the Chevrolet Camaro SS from the years 2016 and 2017. All of them have openable doors, engine hood and trunk lids.

The modelcars, which Autoworld released to the Chevrolet Camaro SS under the item nubmers AW230 in red, under AW243 in dark grey as well as under AW244 in poisonous green with black stripes belong to the series Muscle Cars USA. At first glance, the term pony car might be more appropriate, with which rather small coupes and convertibles with big engines are described. The here presented Camaro replicates the sixth generation of the Camaro, which has been sold in the USA since May 2015. The original model appeared in 1966 as the counterpart to the Ford Mustang. In the name of the most powerful versions there is the double letter SS, which stands for Super Sport: These vehicles, in turn, are counted among the large muscle cars. In the case of the Camaro SS 2017, its 6.2 liter V8 have an output of 333 kW / 453 hp.

Thus, such a SS as coupe reaches 290 kilometers per hour. The 617 Newton meters (Nm) of maximum torque reach the rear wheel drive through a six-speed manual transmission or an eight-speed automatic. This is also what the other vehicles mentioned at the beginning have to offer, which share the excellent finish of the workmanship with the models of the Chevrolet Camaro SS: the paintwork and gaps are top notch! The engines are, of course, real eye candy with the classic cars, because they are not hidden under a modern plastic cover, but offer many technical details that make collectors' hearts beat faster. They should be happy too about the affordable prices, with which these modelcars are currently offered.