In the fourth quarter, the modelcar manufacturer from Aachen will deliver its novelties to the topic Hamilton and Co.: We bring a preview to the new miniatures 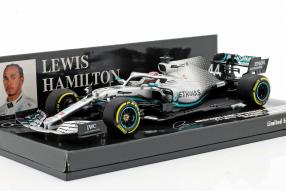 With the Grand Prix of Austria in Spielberg, the new season of the Formula 1 had started on July 5th, 2020: After a thrilling race, Valtteri Bottas won in front of Charles Leclerc and Lando Norris on McLaren-Renault. But after three victories in a row - at the Grand Prix of Styria, in Hungary as well as in the first of two Grand Prix in Silverstone - Lewis Hamilton is already leading the driver standings. With his win at the anniversary race, Max Verstappen has shown the potential of the Red Bull Racing Honda. Still eight further racing weekends have to be acomblished until the champion of the corona-year 2020 will be chosen. Until then, ck-modelcars.de offers the miniatures in scale 1:43 and 1:18, which competed in the races of the previous years and to which the editors attach corresponding images to this article. Lewis Hamilton has always played a major role.

But now to the novelties among the modelcars from Minichamps to the season 2020, the 71st version of the Formula 1. Minichamps is planning the following models for the fourth quarter of this year and we start into this overview with the modelcars in format 1:18, which are produced from diecast and take on the winner of the first two runs.

The two last mentioned modelcars replicate the team, which will compete in the coming year under the name Aston Martin and for which Sebastian Vettel will drive possibly. He is going to leave the Scuderia Ferrari at the end of the current season.

Let us continue our outlook on the novelties of the modelcars to the Formula 1 which are announced in scale 1:43 and from diecast.

Diecast has been the material of choice at Minichamps since the very first day, but in the previous years the high quality polyurethan cast resine took also on importance in the program of the team from Aachen. From this material and to the Formula 1 2020 in 1:43 appear the following models:

ck-modelcars.de already reported in this blog on these modelcars to the Formula 1, which Minichamps has announced as part of the Launch Spec Version in format 1:43. This article from April 17th, 2020, can still be reached via the link embedded below. The list of the Launch Spec models is now also continued in 1:18. What else was "Launch Spec"?

What is "Launch Spec?"

At these miniatures the design comes into play, with which the vehicles were decorated, if the had competed in Melbourne at the Grand Prix of Australia. Minichamps now extends this row also in scale 1:18, whose diecast miniatures mentioned here will reach the collector in the 1st quarter of 2021.

This delivery period has also been announced for the modelcars of the test versions, which are also available in scale 1:18 and from diecast.

The following listed modelcars to the Formula 1 2020 in format 1:18 will have standard paintwork, which are also produced from diecast and will be delivered in the 1st quarter of 2021.

Last but not least: A car with all around closed body, in this case from diecast and very noticeable. Under the item number 155036092 appears the Mercedes-AMG GT R Safety Car Formula 1 2020 in scale 1:18

Here: Click to all modelcars of the topic Formula 1 and new books