Spark now also competes with a completely renewed version of the classic: miniatures in the scales 1:12, 1:18 and 1:43 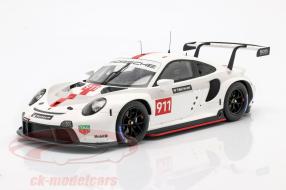 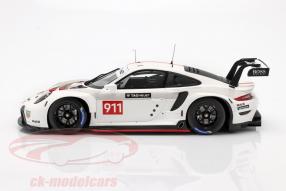 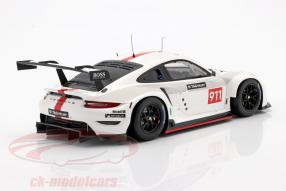 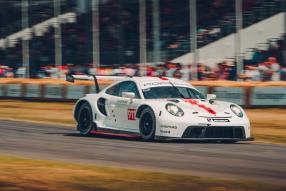 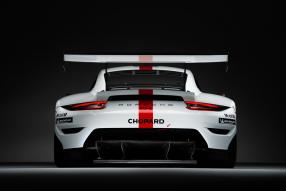 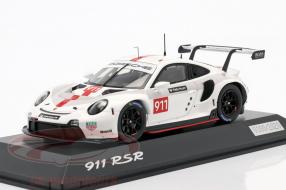 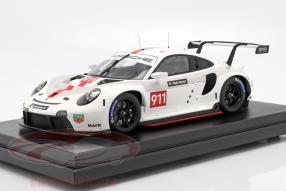 At the title defense in the FIA World Endurance Championship WEC, Porsche relies on the brand new 911 RSR model year 2019. The racing car after the FIA GTE-reglement is a completely new development and takes over from the successful 911 RSR 2017, with which Porsche could win the manufacturer and driver world championship in the FIA WEC last year as well as the endurance classic race in Le Mans and on the North American IMSA racetracks Sebring and Road Atlanta, the "Petit Le Mans". Spark now delivered three modelcars, which replicate the new Porsche 911 RSR: In format 1:43, the RSR appeared under the item number WAP020RSR0L as well as in an edition of 2,020 pieces; in the size 1:18 under WAP021RSR0L limited to 1,000 units and in the super format 1:12 under WAP023RSR0L. Let's take a look at all details!

Of course, the mold engineers from Spark met exactly the appearance and line management of the new nine-eleven for the racetrack. Accordingly, predecessor and successor are very similar: Extensive experience from the successful races of the previous model flowed into the development of the new Porsche 911 RSR. “Since 2017, the 911 RSR has given us over 20 class wins in the world championship and in the endurance series in North America and Europe. Our task in development was to follow up a very good car with an even better one. The engineers in Weissach have implemented this requirement perfectly in all areas," says Fritz Enzinger, Head of Porsche Motorsport: "95 percent of the car are new. Only parts such as headlights, brakes, clutch and driver's seat were taken over."

In addition to that, also certain components of the suspension are from the predecessor. At the drive plant, Porsche stayed true to its lines: Also the new nine-eleven uses a six-cylinder naturally aspirated engine. The boxer-engine, positioned in front of the rear axle, has a displacement of 4.2 liters and developes - depending on the classification - about 378 kW / 515 hp. The new drive plant is the biggest boxer-engine that was ever installed directly from the factory. It is shifted with a sequential six-speed dog gear; the weight-optimized body shell was created in aluminum-steel composite construction. According to Porsche, the most spectacular 911 of all time celebrated its world premiere on July 6th, 2019 at the Goodwood Festival of Speed in Great Britain. The Porsche 911 RSR also made its racing debut on the British Isles at the start of the FIA World Endurance Championship (WEC) season.

Let us now come back to the modelcars. The length of the role model is exactly 4,593 millimeters, however, measured without splitter, rear wing and diffusor: it is 10.6 centimeters in format 1:43, in 1:18 whole 25,51 centimeters as well as 38,28 centimeters in the large scale 1:12. The details around headlights, fittings, safety devices and even the joints between the body components are naturally best shown off in a large format. The 1:12 version is delivered on a solid plate and with a showcase. This also has the next smaller model, which, like its larger counterpart, has extremely fine antennas on the roof. Most of the parking spaces in the showcases are occupied by the 1:43 911 RSR, the detailing of which is in no way inferior to the two larger models. The modelcars are individually numbered and the design of the front and rear aprons is reminiscent of the 992.

Click here to the modelcars of the Porsche 911 RSR