Solido produced modelcars to the VW Beetle from France in scale 1:18, which are dedicated to a further developed version 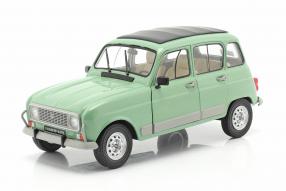 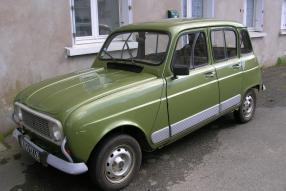 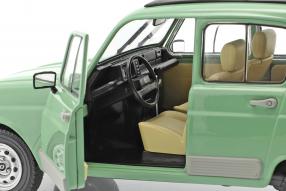 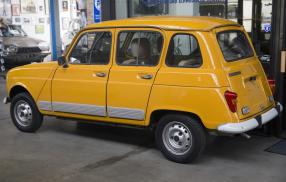 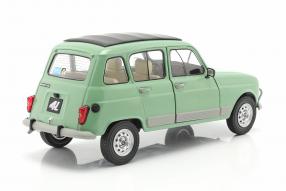 Laying back and remember bautiful things - that's meant when the net comunity exchanges ideas about the hashtag Throwback Thursday. The focus of today's article of your favorite blog is not an exciting athlete on four wheels with the Renault 4, but a vehicle that many people still like to remember. Mainly because many new drivers with fresh licenses had the chance to find a cheap mobile pedestal with the used R4, which promised a lot of mobility with its four doors and the large tailgate. A visit to Ikea? No problem, the Renault 4 offered enough loading capacity. The French label Solido dedicates the small car under the item number S1800109 miniatures to the R4 GTL of the model year 1978 in the luxury version 4L with a rolling roof in contemporary celadon green.

With this car, Solido chose a role model, with which a little more modernity returned to the Renault 4: With the designation GTL, the R4 came with a grey colling grille on the market. Its four-cylinder developed 25 kW / 34 hp from 1.1 liter displacement; so Beetle level. Due to conflicts and parking accidents in the city traffic of Paris, plastic planks were attached on the sides, which even managed to become a feature of the Mercedes-Benz S-Class W 126 around a year later. The R4 GTL, however, was stripped of its chrome jewelry on the bumpers and instead received the grey paint in the tone of the grille and side planks. Under the sheet metal, the front drum brakes should later be exchanged for disc brakes; another parallel to the VW Beetle. But now we come to the model.

Corresponding to the role model, Solido equipped the Renault 4L GTL with a retractable roof, which, however, is presented in closed position. The line guidance and appearance of the small car is hit extremely well, which was presented in the original version in the year 1961 and left the production line until the end of 1992 8,135,424 times. Solido has provided the GTL-version two openable doors. The spartan interior with a correct replica of the dashboard as well as the reproduction of the side sliding windows are very well made. A R4 GTL model year 1987 with signs of wear is to have from 2,900 euros; better copies are available at around 6,000 euros. The youngtimers and modelcars built from diecast still convey driving pleasure and a touch of the lifestyle of an R4 driver today; they are also inexpensive to maintain. Both!

Strong collective topic: Click to the miniatures of this Renault 4 and more