Diecast modelcars of the French circus Pinder have long been part of the web shop, which has new entries at the start of the week 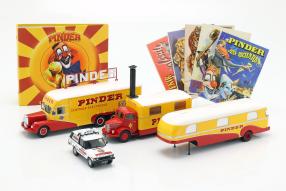 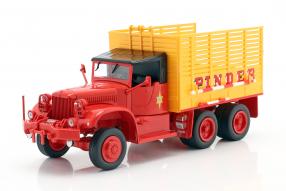 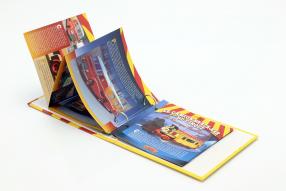 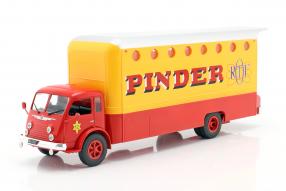 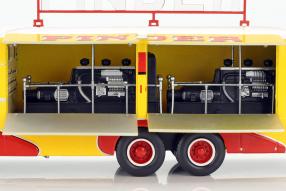 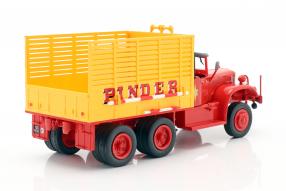 Circus Busch or Circus Krone: Names that are known among the fans of clowns and ring in Germany for a long time. Modelcar fans, on the other hand, will also know something to do with the name Circus Pinder, because there are attractive modelcars on the market to this organizer, who comes from France. Our web shop has just launched four new miniatures in the red and yellow colors and in scale 1:43, which are based on some of the vehicles from the fleet of the Circus Pinder, which has been in existence for more than 160 years. With this article, however, we do not want to go into the high-quality models made from diecast, but rather briefly explain what Circus Pinder is, for which even the tourist office in Paris is promoting: A look behind the scenes.

The Circus Pinder has been founded in 1854 by the brothers George and William Pinder in England, who were considered as specialists for equestrian art at the time. The success lead the company to carry out its presentations also in France from 1868. The ever increasing back and forth between the two countries led the permanent installation of the Circus Pinder in France: That happened in the year 1904 under the direction of Arthur Pinder, the son of William. When Arthur died in 1928, Charles Spiessert bought the circus, modernized it and increased its media awareness by designing television and radio programs in collaboration with the ORTF. In 1971, none other than actor Jean Richard became the owner. But art and finance don't often go together: In 1983 the circus faced bankruptcy.

Gilbert Edelstein, a former employee of Jean Richard, acquired the company with the belief that it could be restarted. He modernized the management and quickly returned to popular and financial success: in a few years, Pinder became one of the jewels of the French and European circus. Edelstein founded a new circus dynasty: his wife Andrée was actively involved in the restructuring of the company as general manager; the children Sophie as an important illusionist and tamer Frédéric are recognized artists. In 2018 there were again existential difficulties. Edelstein transferred the operational direction to Claude Vonner and the artistic direction Judicaël Vattier, whose new show featured acrobats, clowns, magicians, contortionists and v. a. shows more spectacular performances.

It is also an excursion into circus history when a collector turns to the Circus Pinder modelcars from Direkt Collections. We currently have these at a good price. It starts, for example, with the starter set, which includes a Bernard 28 Electrical Truck 1951, the Unic ZU 51 Kitchen Truck 1952, a caravan trailer from 1955 as well as the Range Rover advertising vehicle and an informative ring binder with postcard set. The Bedford T968A, which was used as a straw truck, as well as the Bedford big cat transporter and the OB van with the logo of the Office de Radiodiffusion Télévision Française ORTF, from 1964 to 1974 the public broadcaster of France, go perfectly with this. The offer is rounded off by the Panhard IE45 Pinder Zirkus tractor unit. We say: raise the curtain, clear the ring!

Click here to the modelcars of Circus Pinder in 1:43