A real hype has broken out about the models of the racing transporters from the recent history. Brand new miniatures expand the topic in scale 1:18 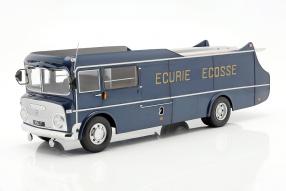 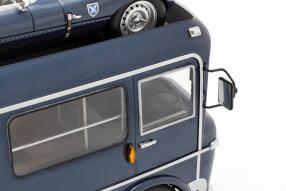 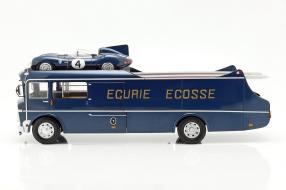 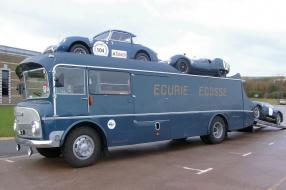 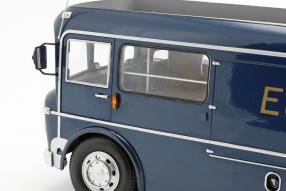 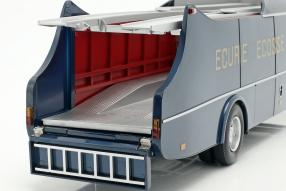 CMR presents with the racing transporter of the Ecurie Ecosse a real blast in scale 1:18. This one is interesting for the collectors of the Fiat Bartoletti-vehicles on the one hand, which recently appeared to the racing stables of Ferrari and Alan Mann Racing, but also as a backdrop for the collectors of the Jaguar D-Type, which amongst other things won the 24 Hours of Le Mans in 1956: With the Jaguar D-Type from the team Ecurie Ecosse, the British Ninian Sanderson and Ron Flockhart succeeded at the 24th version of the traditional race. The modelcars, available under the item number CMR142 of the D-type, which is powered by a 3.5 liter six-cylinder with 184 kW / 250 hp, are built of diecast as well as the racing van of the team Ecurie Ecosse, which we want to take a closer look at in this article.

And for this sensational vehicle, which has a high recognition value, CMR brings a wonderful modelcar under the item number CMR206. The transporter was designed by Selby Howgate in the late 1950s and built by the body builder Alexander from Falkirk, Scotland, on the basis of a truck chassis from the former British commercial vehicle manufacturer Commer. The racing transporter is powered by a TS3 three-cylinder two-stroke diesel engine. The two-axle vehicle can carry three racing cars - one inside and two above under the open sky - as well as the mechanics and is also a service workshop for the Jaguar. The spectacular, futuristically styled car made its first appearance on May 29th, 1960, on the Scottish race track Charterhall. But the missions left their mark.