06.09.2019Renault: Novelties from Z-Models and Automobile

Fans of the French automobile group can expand their collection with a compact sedan and a mature truck in scale 1:18 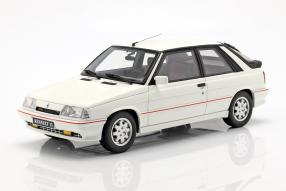 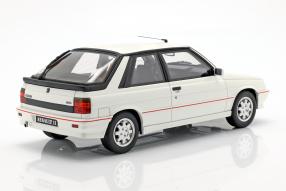 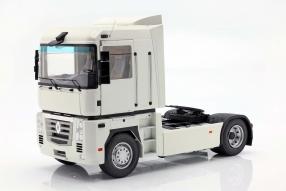 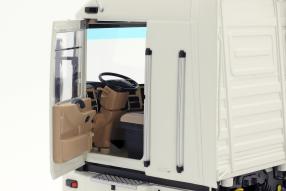 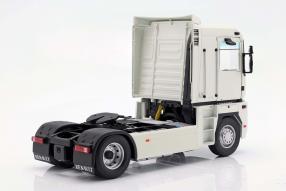 Today's blog article is dedicated to two novelties from this week, namely the Renault 11 Turbo from 1987 and the truck Renault Magnum from 2001; both are designated within their models series with Phase II. So the collector of the French national brand get two outstanding car models, which have a high level of detail unitl the last corner and know how to convince with the processing quality. In appearance, they correspond exactly to the lines of their role models, so much was anticipated. Real slip-ups in this discipline can no manufacturer of high-quality collector models afford today. The Renault 11 Turbo is made from the well-proven resine polyurethane casting resin; The models of the truck, however, of diecast. Therefore, the miniature of the truck unit has steerable front wheels and opening cab doors.

The Renault 11 comes from the portfolio of Ottomodels. The three- or five-door hatchback sedan of the Golf class was first introduced in 1983 and shares the base with the two years earlier presented notchback four-door Renault 9. The cars were developed in cooperation with the AMC American Motors Corporation and therefore appeared in the US. The series in total and the version Renault 11 Turbo received a facelift in the fall of 1986, which can be seen especially on the larger headlights. The turn signals were laid in the bumper molded to the front apron. Even the with its glass dome to the Porsche 924 reminiscent tail received a revised appearance with darkened taillights. This variant serves as a model for the here presented in white, limited to 1,500 units modelcar with the item number OT319 in the format 1:18.

The Renault 11 Turbo, which served as homologation basis for the motorsport in the groups A and N, made since the refresh 85 kW / 115 HP. The 1.4-liter four-cylinder was since then available with 165 Newton meters (Nm) maximum torque to the front-wheel drive and brought the car in 8.5 seconds from zero to 100 km / h; At the top, a Renault 11 Turbo reaches 190. Doors and hoods remain closed as usual with Ottomodels, but the execution of beads and edges, the equipment in the clearly recognizable interior and the attention to detail make up for it all. As mentioned earlier, the main focus of this article, the Renault Magnum from the 2001 model year, offers two doors that can be opened. How can a Renault car collection be complemented more beautifully than with a truck in the background?

The miniatures from Z-Models now offer an opportunity: The Magnum is the truck from the house of Renault, which is in the same performance class as the Mercedes-Benz Actros. For reasons of comfort, Renault has undocked the driver cabin from the chassis and disposed the engine compartment for the generally used six-cylinder diesel engine from Volvo with up to 368 kW / 500 hp and 12.8 liters displacement outside the cab. This clearly visible separation exactly reproduces the diecast modelcar, which is available in a scale of 1:18 and as part under the item number ZMD1800101. The Italian car designer Marcello Gandini is responsible for the design of the Magnum, and we would like to conclude with the icing on the cake of the "i", because he has designed sports car legends such as the Lamborghini Miura and Countach and the Lancia Stratos.