Three attractive modelcars in scale 1:43 are available, which are exclusively to have at ck-modelcars 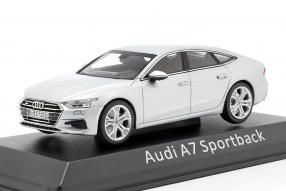 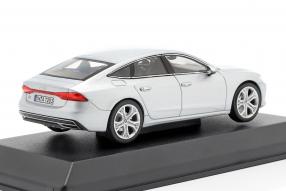 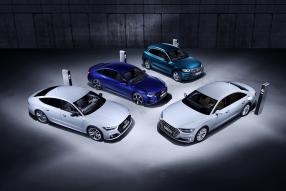 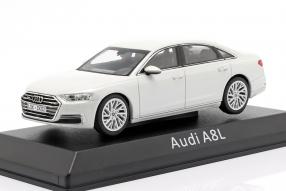 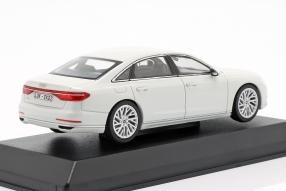 The pallet of miniatures, which originated in cooperation with well-known manufacturers and are only available at ck-modelcars, is getting more and more extensive. New in it are the models of the current top vehicles from the Audi-programm, which iScale has delivered in white and silver painting. It's about the miniatures of the Audi A7 Sportback of the model series C8 - which were presented in the design studio of Ingolstadt in October 2017 and have the internal designation 4K - as well as the modelcars to the Audi 8 L of the model series D5, which was presented just before in July 2017 for the first time and celebrated its premiere in front of an audience at the IAA 2017; internally designated 4N. The models of the Audi A7 Sportback in floret silver are available under item number 1430000000042; those of the Audi A8 L in floret silver and glacier white below 1430000000066 as well as 1430000000073.

In its appearance the modelcars of both series, which are traded for a really sensational price, really correspond to the role models. iScale is known as a label, which pays high attention for correct reproduction of form, lines and details. Accordingly, the lines of the modelcars match exactly those of the upper class cars from Ingolstadt. Especially in the area of the bulge of the bonnet and the indicated fender widening, it becomes clear how carefully iScale has approached the reduction of the vehicles. With the bulging fenders reminiscent of the original Quattro in 1980, design director Marc Lichte wants to build on the appearance of this car, with which the rise of Audi in the premium segment has began. Lichte should be satisfied with the look of the miniatures, because these are a perfect-real copy of his work.

Coming weekend: CK at the Nürburgring

iScale has not just hit the overall lines, but also implemented the details very well as the attached iron handles. The singleframe-grill's, which exist of many spokes, are met right donw to the last roll; at the rear, there are corresponding diffusers again. The Audi A7 Sportback is available with hybrid, diesel or petrol engines from 180 kW / 245 hp to 270 kW / 367 hp; the engine range of the Audi A8 offers 210 kW / 286 hp and 250 kW / 340 hp. The fans of the brand with the four rings are likely to be happy about these modelcars and the low prices of less than 30 euros; In the finish, they are in no way inferior to more expensive miniatures to Porsche or Mercedes-Benz. We will be offering these and many other models at the Nürburgring next weekend: Our trailer is waiting in the paddock of the ADAC GT Masters.