The Aachener modellers brings out this year&#039;s car of Hamilton and Rosberg in die-cast zinc In due time before the Japanese Grand Prix. 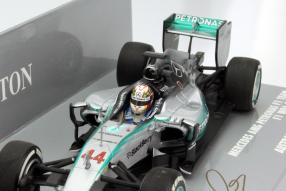 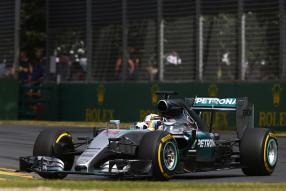 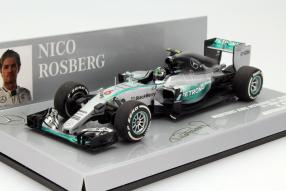 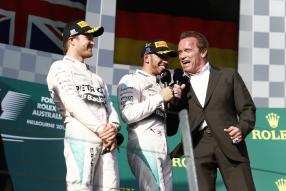 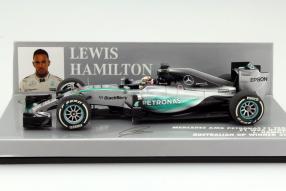 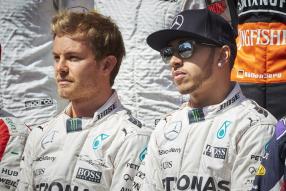 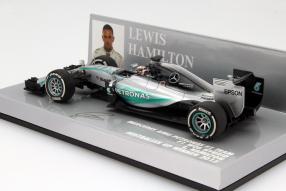 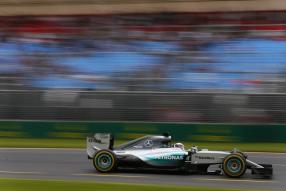 Last week you could have read about the pre-announcement from Spark about new formula 1 model. Now, however, Minichamps are crossing the finish line and presents brand new and very well made models for the formula 1 season 2015.  The Mercedes F1 W06 Hybrid - the official car of Lewis Hamilton and Nico Rosberg- With the start numbers 44 and 6, in the Australian race look. it has the typical detailed finish of minichamps. In 1:43 its a perfect match to the original. it made of a die-cast zink / plastic composite construction witch minichamps has used for years. Here we'll go once again into the important details about the current race and look at how it stand in the formula 1 before the race in Japan on sunday

The statistics for the Mercedes F1 W06

The sixth Formula 1 car of the brand of the modern era was presented on 01 February 2015 at the Circuito de Jerez. The race car, witch wieghs 720 kg including driver, was designed by designer Aldo Costa and is driven by an engine named Mercedes-Benz PU106B hybrid. The 1.6-liter V6 engine develops its power by means of a turbocharger.

As of the Grand Prix of Italy, the race car has recieved 451 championship points, achieved 10 wins and 12 pole positions. So far, Hamilton and Rosberg took the F1 W06 hybrid 8 fastest laps, gathered 21 podiums and completed 576 laps over 2901.1 kilometers. Only the race in Singapore, were there problems for the W06: Hamilton had been stoped by a defective clamp on the hose between airbox and intercooler.

Nico Rosberg before the start of the Japan GP

Nico Rosberg only came in with a 4th place finish; 24.72 seconds behind the winner Sebastian Vettel. How is Rosberg before the Grand Prix in Japan, the 14th round of the season, which at the Suzuka Circuit will be held? Rosberg: "Singapore was not a good weekend for the team I know, however, that everyone has been working hard to understand what happened, it is also good that we directly get an opportunity to the straighten this weekend... Suzuka is an amazing track -. one of the best ever and a real test for the driver on a round with fast, medium fast and slow corners is so much going on, the first sector is great fun you have the line meet exactly and the slightest mistake.. can cost you a lot. you have to find a good rhythm. This challenge I really like. "

Rosberg recalled to have had not much luck in the past at this track: "I would not change this weekend of course like course be all of us, when we come back to Japan, thinking of Jules and his family, he will always be.. be in our hearts. "Jules Bianchi crashed in Suzuka a year earlier, came off in the 44th round in the rain off the track and crashed into the rear of a salvage vehicle, which just hid the Sauber of Adrian Sutil.

On July 17, 2015 - after 9 months in a coma - he succumbed to his injuries. This rainwater can drain off better in the future, the drainage system has been improved in several places. Affected is also the area of the S-Curves, where Jules Bianchi crashed. Fasteners for banners have been replaced by that of light material.

The standings before Japan

After the Singapore Grand Prix Lewis Hamilton leads the drivers' standings with 41 points ahead of Nico Rosberg with 49 points, ahead of Sebastian Vettel. In the constructors' championship, Mercedes leads with 153 points ahead of Ferrari with 265 points, ahead of Williams-Mercedes. Pirelli provides the drivers which tire compounds P Zero Hard (orange) and P Zero medium (white) and for wet conditions, the Cinturato intermediate (green) and Cinturato Full Wets (blue) available.

Even Toto Wolff, Mercedes motorsport boss wants to forget Singapore: "Whether Singapore was just a blip or not - we should not take our position at the top for granted and should not expect that it can not catch us. Suzuka is a track that should suit us better. that's why it is a good indicator. "ck-modelcars wishes the team the best of luck and you a nice weekend and a lot of fun with the new models.