CMR has released a 1:18 scale version of the Berlinetta Competizione reminiscent of the legendary Tour de France 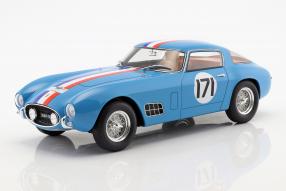 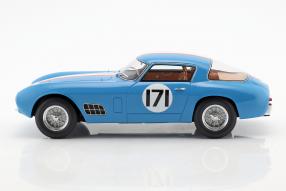 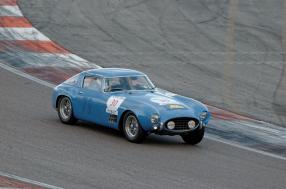 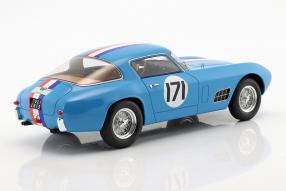 We already presented the basic version of the modelcar of the Ferrari 250 GT Berlinetta Competizione of the model year 1956 by CMR in the scale 1:18 last November. With the current delivery we get an interesting color variant of this sports car model, which is reminiscent of an traditional event: the Tour de France. Not the bicycle race of the same name, but the edition for automobiles, which was launched from 1899 to 1986 in France. It corresponded approximately to the Mille Miglia, so it was a pure road race, but was held in different stages and later supplemented by evaluation runs on circuits. The role model for our model has managed to win the fifth place in 1957. The shapely 250 GT was driven by team boss Jacques Péron and Georges Burggraf.

The two-door racing car in the classic blue French racing car is available under the item number CMR 108 exclusively from the modelcar dealers modelissimo and ck-modelcars. The miniatures are based on very, very rare models, namely the first series of 77 copies, which came on the market from 1955 to 1959 in a designed by Pininfarina, but built up at the Carrozzeria Scaglietti body. Our model corresponds to the so-called Series 1, which, like the series, had a long bonnet with curved fenders, with a round headlamp in each of its front ends. CMR has taken a very close look at this vehicle and met its specific characteristics exactly, which we want to take a closer look at. If we can take our eyes off the mega-sharp model car spoke rims.

Under the name Ferrari 250 in the years 1952 to 1964 a whole range of different vehicles for road use and the use of the racetrack came on the market. The model name picks up the displacement of each cylinder, but was rounded upwards. A twelve-cylinder with 3.0 liters of capacity under the hood had each of these vehicles, which were sold as a coupe and convertible and were optically changed in the course of the production time of the series. Just as the vehicles CMR now took the model of the presented modelcar, which were presented for the model year 1956: Clearly recognizable by the used only in the series 1 panoramic glass at the rear of the Ferrari and motorized with the type 128B, 177 kW / 240 hp strong.

Top quality in the finish of the surface

But there were other subtleties that were or are to be found in these variants of the 250 GT: The radiator opening, for example, is oval and has auxiliary lights on some vehicles. There is a large barred vent on both sides between the wheel arch and the door. Behind the door, the roof drops smoothly to the boot lid; a side window in the C-pillar is missing. The rear fenders are profiled. Its upper edge runs horizontally up to the vertical tail lights. CMR has been very knowledgeable in transferring these really fine details to the modelcars produced from high-quality resin plastic, exactly matching the appearance of the role model's design. For us not the fifth, but the first place!

Here: Click to the modelcars of the Ferrari 250 GT Competizione