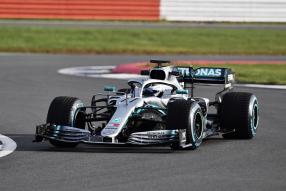 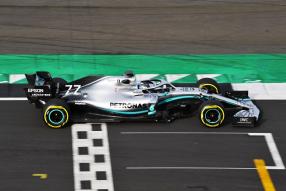 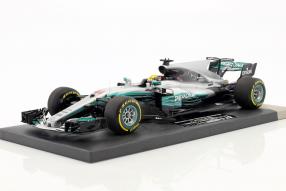 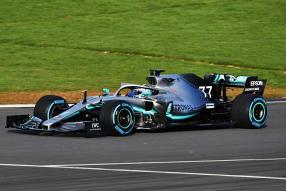 Every year again... it is Christmas, but also time for new race cars for the teams of the Formula 1. Yesterday, on the 13th of february 2019, the Mercedes-AMG F1 team presented the W10, with which Lewis Hamilton wants to achieve his sixth World Cup title. On the occasion of this appointment, we looked in the warehouse, which miniatures are available for the fans among you who want to close one or the other gap in their collector's showcase. At the very front of the range should be the set that Minichamps has built in cooperation with CK: Only 99 units of the double showcase with the miniatures of the Mercedes-AMG F1 W09 EQ Power + with the startnumber 44 and 77 were produced. The set, with which the driver and designer title 2018 is equally celebrated, is available under the item number 413184477 exclusively at CK, only a few pieces to have.

In the modelcars of the new W10, we will find at the end of the year, the innovations that distinguish the role models of the same vehicles from 2018: There would be the front wing, which is widened by 20 centimeters to now two meters, with less constructions, the ten centimeters wider rear wing, which is also mounted slightly higher and the elimination of the winglets on the cooling air supply for the brakes. The new gloves of the drivers, with which the pulse and oxygen saturation of the pilots will be monitored, will of course not be seen in the model just as little as the five kilograms larger tank volume: 110 kilos may be carried from 2019 onwards. The tires will continue to come from Pirelli. Let's start on March 17th in Melbourne, Australia; The season ends on the 1st of December (!) on the Yas Island of Abu Dhabi.

Let's come to the W10: Together with his team, the manufacturer is also celebrating 125 years of motorsport with the new car. In 1894, Daimler engines won the world's first car race from Paris to Rouen. Two vehicles equipped with Daimler two-cylinder V-engines shared the first prize in the 126-kilometer race. The 2019 vehicle from Mercedes-AMG F1 honors this important event in the company's motorsport history with a new design that has been reduced to two main elements. The first element is a star pattern that stands for the elegance and comfort of Mercedes-Benz. It combines high quality technology with craftsmanship. The second element is a single, strong Petronas green flow track that stands for speed and dynamics.

Then as now a topic: The weight

Just like the original silver-arrows from 1934, the painting of the W10 brings also a performance advantage, because the new design has a small weight advantage compared to the previous model. The year 2019 also marks the 85th anniversary of the silver-arrows. The first race of the Mercedes-Benz W 25, the popular eifelrace at the Nürburgring, took place on the 3rd of june 1934. According to the legend, the metallic silver dress had been exposed just in the night before the race. For that, the white color was ground down to bring the starting weight of the W 25 to the minimum weight prescribed by the rules. The struggle for weight: In motorsport as well as every year after meals for Christmas a recurring theme.