With the modelcars to the top model of the people from Ingolstadt, the label Motorhelix celebrates its premiere in scale 1:18 in our blog 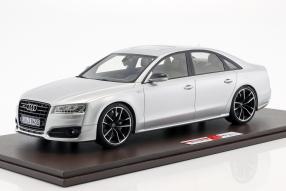 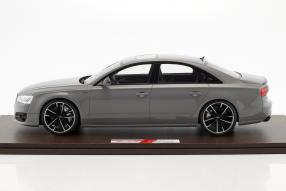 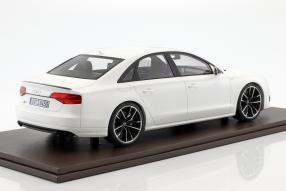 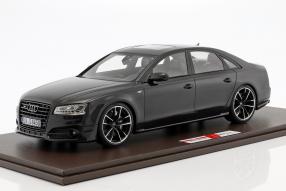 When we have heard the name Motorhelix for the first time, we honestly smiled about it and  thought about the same name engine oil from Shell. We asked oursleves what is hiding behind the name. Motorelix - own spelling MotorHelix - is the brand of the Hong Kong MotorHelix Trading Co., Ltd.; a founded company in the year 2016, whose team has been active in this area for many years, consits of people, who are even excited fans of the scaled modelcars from the motor racing sector. The aim of the company is to create own car miniatures with good quality and high value. The focus is on the material Resine, which is not unknown for our readers. The Motorhelix brand debuts in our blog with four versions of the 2017 Audi S8 plus, a V8 whose basic pattern appeared in April 2012.

Two years before the end of the production, the Audi S8 which belongs to the D4 series, was equipped with the more powerful S8 plus, whose 4.0-liter eight-cylinder twin-turbo delivers 445 kW / 605 hp; 750 Newton meters (Nm) maximum torque to the four-wheel drive and shifted by an eight-speed Tiptronic. The empty nearly 2.1 tons heavy luxury vehicle drives at top speed 305 kilometers per hour and accelerates in 3.8 seconds from 0 to 100. The basic version S8 with its 382 kW / 520 hp needs 4.2 seconds after all. A fine role model, which had been chosen by Motorhelix - and as mentioned above - is made out of the high-quality polyurethane casting resin. It makes lower demands on the mold making and thus allows only small series models of this quality.

Has Motorhelix achieved its goal?

Motorhelix offers the S8 plus, depending on the color, in an edition of 50 to 399 pieces. The models are approximate in myth black, glacier white, terragrey and floret silver. Motorhelix waves functional parts, but instead the label highlights the unique potential of resin: "The material can be processed very well to reflect the actual appearance of the car; even under the macrolens, an exquisite reproduction would be presented to us. The high value of the material and the abraison of the mold is the reason for the limitation of those models on the market, which contributes to a high collector value." But are the miniatures really as good as Motorhelix claims? Let us park it under our critical eye!

The front grille achieves a level of detail and vertical integration that looks almost unattainable. The nature of the replica of the interior of the headlights and the feel of the iron door handles is upper class; as well as the rims and brake system. The body lines meet the appearance and the design of the model perfectly! The attachments such as taillights and antenna are formal and the fit is great! The interior is so detailed that we think we have the S8 plus for the road in mind. The "engine" in the name implies the speed and the spirit of the automobile; the "helix" stands for the gene and the essence of the cars. 15 touring car, SUV and luxury car models are expected to arrive each year; qualitatively divided into two classes and supplemented by office supplies articles, in relation to car culture. We wish you a good and exciting 2019!