It was one of the most successful racing cars in the world, even though the commitment had not brought positve results in the beginning. To the year 1969 there are new model cars available 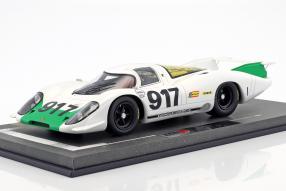 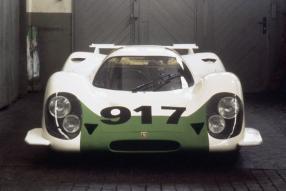 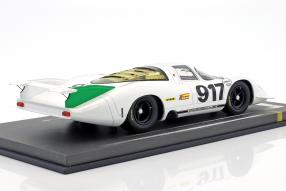 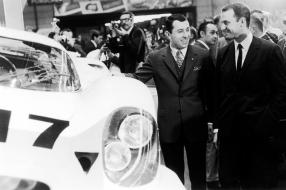 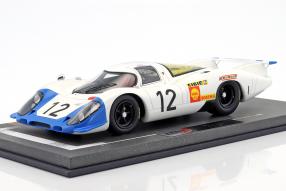 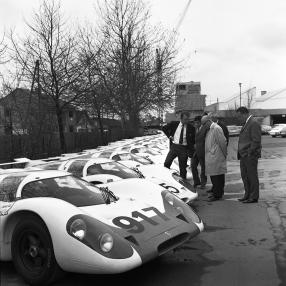 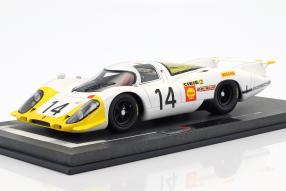 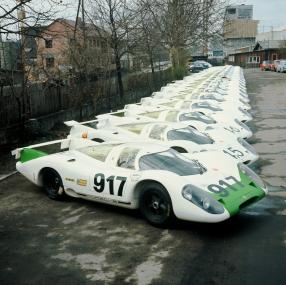 Not a week without the Porsche 917 in the blog, thats how you might think, but today is something different: not the winning cars, for example in paintwork of Sponsor Gulf are in focus, but the cars which were presented to the public in Geneva in 1969 and went for the first time in the same year to the start; formally not accordingly to the known winner version from 1970. Small series manufacturer BBR delivered four model cars at the beginning of the week, which are dedicated to the early Porsche 917: First in the optics, in which the car celebrated its world premiere (BBRC1833A, car number 917) and then in the colors with which three vehicles went to start at the 24 hours of Le Mans: No. 12 with Vic Elford and Richard Attwood (BBRC1833B), No. 14 with Rolf Stommelen and Kurt Ahrens jr. (BBRC1833C) and No. 15 with Herbert Linge, Brian Redman and Rudi Lins (BBRC1833D).

The miniatures, which have the article numbers in brackets, are limited to 200 units each and are in scale 1:18. As usual from BBR, they are made of the high-quality resine and are extremely well made in the finish of their details. The appearance matches perfectly with that of the role models, which should ultimately be a milestone in the history of Porsche: With the twelve cylinders, built according to rule 25, the people from Zuffenhausen set the basis for 19 victories in Le Mans. At the origin, the air-cooled center-engine, with its 4.5 liters, achieved 383 kW / 520 hp. Porsche engineer Hans Mezger began in 1968 with the development and the purpose to finally win a sports car world championship. This had been denied by the entrepreneur so far, as long as races had been driven without a high-capicity engine.

The here presented model cars represent the long-tail version, which should bring aerodynamic advantages at high speed on long straights. BBR has hit the shape perfectly of the not easy to drive race car, due to the lack of contact pressure at high speed. BBR also simulated the originally movable flaps, which should bring more contact pressure on the respective unburden rear wheel, when necessary. These were controlled by a connected rod to the wheel suspensions, but in middle of 1969, moving parts of this type had been banned by the FIA. With a lot of knowledge in detail, BBR has also rebuilt the engine cover, a transparent hood, which was made on the model of polymethylmethacrylate (PMMA) and had integrated louvers.

A typical feature of the Porsche 917 should be the fan, which lies above. At 8,400 revs, this fan delivered 2,400 liters of air per second and required about three percent of engine power. "You can not lose air on the road," which Ferdinand Piëch explained the decision for this type of construction, which should make advertising for the air-cooled Porsche 911 and 912 this time. What also succeeded: Rolf Stommelen was the fastest of the training run, 1969 in Le Mans and drove in the initial phase of the 24 hours, one record lap after another. The fact that the cars, used by Porsche System Engineering, did not finish, was justified with teething problems: clutch damage, broken oil seal. But: Until Sunday afternoon, the No. 12 led the race!

Here: Click for the modelcars of the first Porsche 917