05.10.2017Throwback Thursday with Triple9 and a legendary car

Under the name Youngtimer Classic Collection some popular vehicles have been reduced to 1:43 scale. A particularly hot Benz is among them. 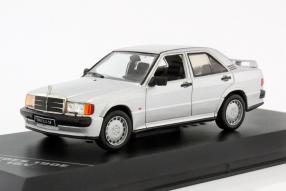 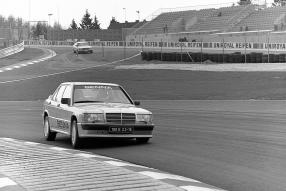 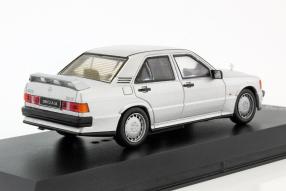 Many of you know that the internet scene under the hashtag throwbackthursday it is understood for a retrospect of beautiful memories from the past. The company Triple9, which is well-known for its Diecast miniatures, also appears to be leading the way with the series Youngtimer Classic Collecion at a really fair price back into the recent past of the 1970s and 1980s. In the 1:43 scale, the models of this collection are characterized by an acceptable look, which they have in common with their models. In the eye, the beautiful details, such as multicolored tinted taillights. The makers of Triple9 have also shown a happy hand in their choice of role models. A model, however, is a bit more legendary than the others: the Mercedes-Benz 190 E 2.3-16 with the item number T9-002.

In 1982, the series W 201 to August 1993 brought it to 1.9 million built copies. The counterpart to the 3 Series from BMW and thus the forerunner of the C-Class was also highly successful in motorsports. From 1982 to 1987, the 190 E 2.3-16 was built as a homologation model; powered by four-cylinder four-cylinder M 102 with 136 kW / 185 hp. In the second stage of the Evolution, the AMG used the car to win 16 of the 24 races of the German Touring Car Championship in 1992 and to take the first three places in the championship. Famous was the 190 E 2.3-16 also by the fact that Ayrton Senna on 1984 May 12th 1984 the Race of Champions to the opening of the new Grand Prix circuit at the Nürburgring before 20 identical cars won. Et al with Carlos Reutemann, Keke Rosberg, Jody Scheckter, James Hunt and Niki Lauda. Senna came to Lauda 1.38 seconds ahead of Lauda.

Triple9 has also attracted attention to other legends, including the very first Range Rover from 1970, which is the forerunner of all today's luxury SUVs, but still had an interior for cramming with the water hose. The Alfa Romeo GTV6 2.5 from 1980 is also a model of the Youngtimer Classic Collection, like the Ford Capri MK. III 1982 or the BMW M3 Sport Evolution of the first edition of this classic, the E30 from 1989. What we want to say is that this series is a very nice series of models, which one can enjoy because of their small price; pretty staged in cartons with tachoscala. They remind you of the beautiful times of a break-up mood, which was not overshadowed by Dieselskandalen and Stickoxiddiskussionen.