After the set now a single model: Porsches anniversary car as our model car for the day of German Unity 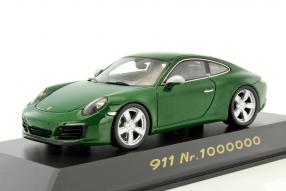 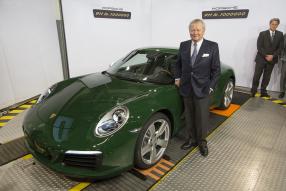 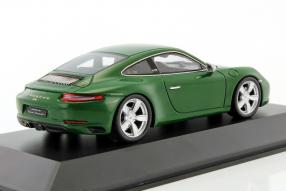 On the Day of German Unity a very special model car: On May 11, 2017, Porsche presented the one-millionth edition of the Porsche 911 to the public. A million sports cars of type 901 to 991 II have been running since 1963. The anniversary car differs in many details from the series variant, which the Modellautobauer Spark has implemented in the usual, handy, clean manner in the scales 1:43 and 1:18. Only a short time later the Stuttgart produced a jubilee set in 1:43, which included a model of the first nine-man and a miniature of the jubilee car. This model, which has been kept in Irish green, is now also available as a single model, the Porsche under item number WAP0209100H. What better way to present a miniature of the perhaps Germanest sports car that is available for the Unity Day?

The Porsche 911 is regarded worldwide as the epitome of the everyday sports car, style icon, distinctive face and heart of the Porsche brand as well as the backbone of the brand in the market. Dr. Wolfgang Porsche, Chairman of the Supervisory Board of Porsche AG, accompanied the development of the 911 from the very beginning: "54 years ago, with my father, I was allowed to make my first trips over the Großglockner-Hochalpenstraße the core values ??of our brand are now so visionary thanks to the 911 as since the first 356 number 1 from the year 1948. " It is also unique that Porsche has kept the basic concept of the Ur-911 undisturbed: the rear engine and the layout of the design by Ferdinand Alexander Porsche have not changed to this day.

All details of the anniversary car impleied

"However, we have developed the 911 again and again technologically, refined and perfected it", says Oliver Blume, Chairman of the Board of Management of Porsche AG, "he has always remained highly modern and technically innovative on derivatives. " The most recent family member: the Porsche 911 GT2 RS, which has recently broken the round record at the Nürburgring. We have reported. The model car from Resine-plastic presented here should be indispensable for fans of the sports car: check pattern on the seats, the steering wheel with wood parts and the plaques make up the model in appearance and detailing correctly. With the video embedded above, Porsche is showing a part of the world tour, on which is the unsalable jubilee car.