Top: The SUV baptized internally on the designation E3 follows the lines of the predecessor and appears to match the IAA 2017 in Biskaya Blau Metallic in the 1:43 format 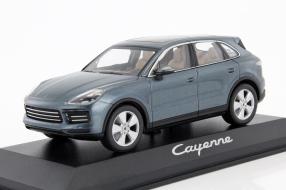 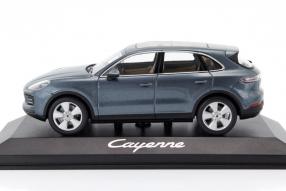 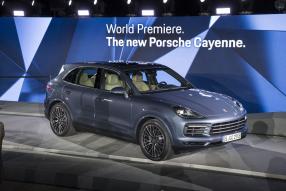 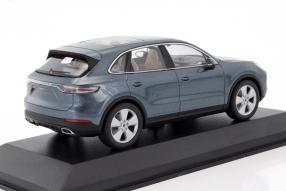 That did not take long: Almost simultaneously to the presentation of the third generation of the Porsche Cayenne, the Stuttgart and the Aacheners from Minichamps presented a successful model car in 1:43 scale. The miniature has appeared under the item number WAP0203110J in the typical Porsche model car wrapping and perfectly reflects the look of the large SUV. It is also nicely equipped: a huge glass sliding roof and an interior, reproduced right down to the last detail, make the small Cayenne a real eye-catcher in the showcase. Minichamps has accepted with great attention to the detail of the radiator grille mask and the taillight band, with which the Cayenne visually to the series Porsche 911 991 and Panamera 971 is to be adjusted.

The Porsche Cayenne looked at in detail

In beige color contrasting beige, the collector will find everything he expects from models from the house of Minichamps: An accurate detail panel with instruments, colored controls, affects the seats down to folds. Crafted by hand, all door frames and door linings are handcrafted. The premium claim, which Porsche claims for its cars, this model car is justified. With one exception: The door handles were unfortunately only engraved, not separately placed on the predecessors. For this, a perfect fit of the glazing and the add-on parts such as the cooler and the transparent white tail lights including the light strip compensate.

The third generation of the SUV presented Porsche on the evening of the 29th of August. The vehicle is introduced as Cayenne and Cayenne S and is a complete new development with nine millimeters lower roof as well as 63 millimeters of extra outer length. The wheelbase, however, remained at 2895 millimeters. New at the Porsche Cayenne is the Achtgang Tiptronic S-transmission, the new suspension systems as well as Porsche's innovative display and operating concept with comprehensive connectivity, which should expand the spread between sportiness and comfort. Two newly developed six-cylinder units are available for the market launch of the internal E3 series: 29 kW / 40 hp more than the predecessor does the 250 kW / 3.0 h turbo engine of the Cayenne without additional letters.

On the other hand, the Cayenne S, equipped with a Biturbo V6, is capable of producing 324 kW / 440 hp from its 2.9-liter displacement - an increase of 15 kW / 20 hp. Equipped with the optional Sport Chrono package, the new Cayenne S accelerates from 100 kilometers per hour in less than five seconds to a heavier legacy, since the model series sold since 2002 have found more than 760,000 buyers. Launched as Type 9PA, the Cayenne 2007 was a facelift and was replaced in 2010 against the new 92A. The Cayenne costs in Germany from 74.828 euros. The prices for the Cayenne S start at 91,964 euros. The model car is naturally much cheaper. That is why we recommend you to secure it, because there will be only one time a first new Cayenne in 1:43 scale.

Click here: Our article about the model cars of the predecessor Cayenne