With this sympathetic, cuddly-acting model car, Sun Star shows how it is possible for outstanding miniatures with little money. 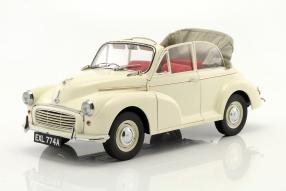 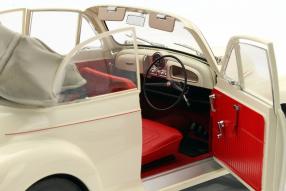 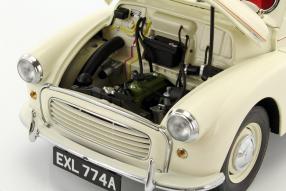 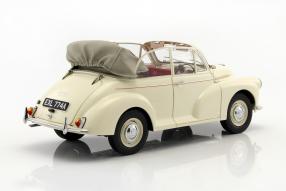 Last Monday, we dedicated our blog to the Ferrari 365 GTB Daytona in a 1:12 scale, and with today's model launcher in our blog we stay with this format. With the Morris Minor 1000 Tourer, however, we go at least to the other end of the scale of the scale - from the point of view of the model, but also from that of the Modellautos. Because the Morris Minor from the production of Sun Star Models is indeed a very big of the equipment, but the price is a real bargain: with 99.95 euros the cheapest model car of this format, we know. And in addition, limited to a relatively small number of 999 copies. Reason enough to look more closely at the miniature made of zinc die-casting. A model that does not fit better Throwback Thurday.

Sun Star Models has produced the Morris Minor 1000 Tourer under article number 4774. The model selection leads us to the year 1965, in which the revised version of the Morris Minor Series II stood in the bloom of its time. The Morris Motor Company built the small car named Minor since 1928; With the Minor MM debuted in 1948 the first post-war version, which was built until 1952 and was replaced by the Minor Series II. Their new facelift leads us to the model of our Modellautos; The last series of this name and with Minor 1000 designated. Among collectors, this version is the most balanced version. With the model year 1965 a new layout for the dashboard, a glove compartment with cover for the passenger as well as one without a lid for the driver and a new heating intake into the Morris Minor 1000.

In addition, there were new back and flasher lights, the Sun Star like the other details handiwork immaculately transferred to the model car; The valve panel with the glove compartments is our special pleasure. The two-door convertible sedan corresponds exactly to the look of the model in 1:12. The model offers a true-to-scale reduction of the nearly 1.1-liter propulsion set, which produced 35 kW / 48 hp. The headlights and radiator grille edges are chrome-plated, separate, orange-transparent indicators, perforated windshield wiper arms, pre-engineered hinges on the bonnet as well as a fine radiator grille and fine details at the rear.

The engine is awesome

The engine is reproduced down to the smallest detail; The small machine enjoys the model of a variety of exemplary coloring - a feast for the eyes. Cables and wires, the data plate at the end wall, the upper cooler box and the lid are small, as exact as they are modeled. The grille is perforated. The finish of this model is unbelievable up to the retractable folding top. And for only 99.00 euros? No mistake? The shape of the control levers in the interior also corresponds exactly to that of the parts in the Minor 1000 for the road. We find a surprise in the trunk: a tool bag with car jack and towing hook - incredible, but true. We love this little ball, which as a model meets the heart without tearing a giant hole into the wallet. Congratulations, Sun Star!